The First Look at Jared Leto's Joker & The Importance of Context 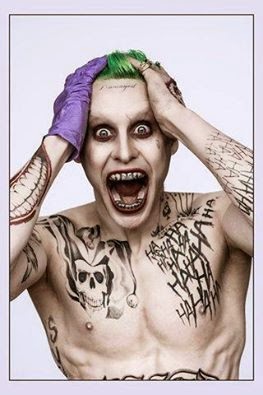 For those of you who are not friends with me on my Facebook, I have a confession to make. This morning I saw the first official image of Jared Leto's Joker, which we will see for the first time in "Suicide Squad" in 2016. My reaction to the image was immediate, and instantly hoped on my Facebook account, posted the picture of my wall, and declared it the "Hot Topic Joker." After discussing the image with friends and taking some time to cool off, I kind of feel bad about making that remark.

That happens a lot nowadays when it comes to movies, especially movies are surely to be a big deal like "Suicide Squad." I remember reading about a time when movies were top secret events. Until you saw a trailer, there were no images or set visits or photos or any type of leakage whatsoever. In the digital age, it is an entirely different story. A picture like the one above can make or break a movie, or it can divide people down the center. It seems this first image of Jared Leto as The Joker is doing the latter. While I think its okay to like or not like the image above, I think its tough to say that the movie will be bad or that the "DC Cinematic Universe" is doomed now that this image is polarizing.

Look, there was no doubt that the image above would get a discussion going, and its been raging all day. I get it, The Joker is one of those pop culture villains that is sacred in the hearts of many. Before we saw a trailer or heard his voice, people instantly rejected the idea of Heath Ledger as The Joker. That seems wild at this point, but I remember bringing up that casting to anyone who would listen in that summer of 2007, and I remember getting a lot of blank stares, people instantly writing me off like I was wasn't being serious. But like I said, that was before a trailer or even a clear look at Ledger's Joker, and once we saw the context Christopher Nolan was creating and how committed Ledger was to the material, everyone embraced him.

Whether or not this new Joker works or not boils down to context, at least that is what I think. Its hard to judge how great this new representation will be if we have no idea what context the character is in. Yes, we know bits and pieces about the story director David Ayer is going to tell and we know some stuff just through knowing about "Batman vs. Superman." But that doesn't mean we have a full context, and we won't until we see Jared Leto in action. So I do humbly apologize for making such a crude remark on my social media and I encourage all of us to just "wait and see" before we declare the DC Cinematic Universe dead.

As for me? Well, after looking and thinking about it more, I am still pretty polarized by the image. There are things I like about it and things I don't. I dig some of the tattoos on him, but I find it a little excessive. Especially the tattoos on his face. I like his classic green hair, but I think it's a little too bright. But hey, movie magic in the final product could dim the color down a bit. I am even digging the metal teeth the more I have sat on it, I just hope in the final product they go for a less sleek look and more of a creepy, horror-movie style look. Right now, after discussing it for most of the morning and into the afternoon, I am more curious than ever for a trailer. And "Suicide Squad" is still the DC movie I am looking forward to most.

But remember people, this isn't going to be Jack Nicholson's Joker, nor Heath Ledger's Joker nor the Joker we saw on TV that Mark Hamill provided a voice for. For someone who writes about movies online, hobby or not, I should have kept that in mind and I am not sure I did this morning. I encourage all of you to remember that context matters, and I think one thing is for sure. The Joker that Jared Leto will unleash next year will be unlike anything we have ever seen before, and I think that fact deserves some support.