The Essentials-#97
The Short Films by Buster Keaton (Part One) 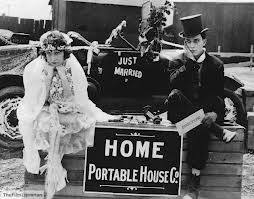 Due to an unexpected birthday surprise, I was able to get a collection of short films featuring Buster Keaton recently. I watched most of the first disc today, and have decided to dedicate the next three Essentials column to these short films.

In a world where we see believable aliens on film, superheroes with seemingly unlimited power, realistic dragons and animals and digital actors, its tough to remember a time when we did not have that. It is even harder to remember a time when films were just imagery with no dialogue whatsoever. But, every great thing must have a beginning, and this was cinema's beginning. Buster Keaton was like the Tom Cruise of his time. He was easily one of the most popular actors of his generation, and he also happened to be a fabulous stunt performer. It may seem weird thinking of films this old having stunt performers, but after powering through this first disc of short films, I can definitely see why they would be needed. Apparently, Keaton was one of the very best, although I can't find in any of my research him being a worshipper of any alien warlords.

I am probably showing just how big and how weird of a movie addict I am trying to sell to a readership mostly comprised of millennial's the idea that silent films are great. Yes, its true I have an appreciation for old film. But this is rainy afternoon taught me anything, its that the best movies of the silent era can compare to the biggest eye-popping, blockbuster out there. There are things I saw today that I feel I could only see in dreams. I think the best people working at the Lucas ranch right now could not pull off images more realistic than the images I saw today.

For example, in the movie "The High Sign," Buster has a fight with a gang of crooks in what I would describe as a trick house, the perfect place to have a Halloween party. This house is decked out with trap doors, escape roots, but everything seems to circle back to certain rooms in the house. The scene in which Buster tries to fight off these crooks and save his girlfriend is feels surreal, but the choreography of how Buster moves and sets the crooks up for defeat is both funny and astonishing. Its also a lot more visually interesting then seeing digital armies come at each other, and I don't want it to sound like I am slamming those movies. Just after growing up seeing that so much in the theater, it is cool to see how it all began.

There is also another great example in the short film "One Week," as Buster is newly married and him and his new bride are dropped off to their "portable home," which he spends the next week building. Near the end of the week, there is a huge storm and the house begins spinning, as if it on top of a massive rotating device. I can't even begin to comprehend how they pulled that off, but it looks like something you can only see in your dreams. There is no way that any type of computer could match the realism on display in this movie, and I really could not believe my eyes.

In the 1920's, everything was over-dramatic, probably because there was no dialogue. But I was able to find big humor in these overly-done performances. There is a level of humor that Keaton and the wonderful actors who worked with him achieved. Much of the comedy is slapstick humor, there is a great scene in the film "Convict 13," when Buster is about to be hanged at the prison, and instead of falling through and dying, the rope bounces him up and down. It is a scene that I did not expect, and it made me laugh out loud. Based on how certain things were staged in the movies, I can't help but wonder if people like Wes Anderson were influenced by these early silent classics. There were many set pieces and even actor mannerisms that I recognized.

Even though it can easy to discuss how excited I am for movies like "Avengers: Age of Ultron," or "Mad Max: Fury Road" or "Star Wars: The Force Awakens," I also love to look back at the vast history of cinema, and all of the great we already have. It is amazing to me that an image of a spinning house can be just as striking as an army of aliens spewing from a intergalactic opening in our sky. This afternoon proved that special effects or not, all film has the opportunity to make our dreams a reality. I loved watching most of this first disc, and I can't wait to watch the other two discs in this timeless collection.