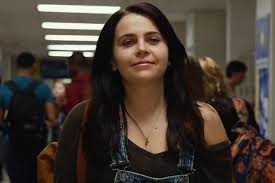 As I watched "The Duff" tonight, I couldn't help but think of old John Hughes movies.

This is a movie that deals heavily in high school pressure and anxiety. It examines the new world of clichés and how everything millennial has affected them. There is definitely a big Hughes vibe in throughout the movie and it seems director Ari Sandal was channeling "Sixteen Candles" in particular. Mae Whitman plays Bianca, a "loser," in her senior year of high school whose friends are all more popular than she is. She soon realizes that her two girlfriends Jess (Skyler Samuels) and Casey (Bianca A. Santos) and her best guy-friend Wesley (Robbie Amell) all agree that Bianca is "DUFF" which means the Designated Ugly, Fat Friend. It is the person people use in order to get into the popular social groups. I suppose if we think about it, whether we want to admit it or not, all had a friend like that in high school, or perhaps you were that friend. There is a popular boy in school named Toby (Nick Eversman) who Bianca wants to date and she enlists Wesley help to make her cool in exchange for helping him pass science class and stay on the football team.

Look, I did like that the movie tried to approach new world clichés in this movie. Even though the films script makes you want to roll your eyes several times, I think the cast gets the most out of it. I liked the performances by Whitman, Amell, Smauels and Santos very much. I liked the appearances by Allison Janney and Ken Jeong. The thing is, despite the neat approach and all the talent, "The Duff" does not really add up to much.

This is a film that seems to know that it is a homage. But instead of taking something cool from the past and putting a creative spin on it, "The Duff" only wants to stay in homage territory, it never wants to become anything more. You will be able to guess the movie from start to finish and it seems director Ari Sandal doesn't seem to try. This could have been a John Hughes movie for a new audience, but Sandal only wants this to be a Hughes parody, and he goes out of his way to hit that point over our heads.

I will say this, I was expecting the absolute worst judging from the trailers. So I must stand corrected that I was not expecting any redeeming qualities. I just wish this movie was a little more convicted to being different. This had the potential to be something special, something nobody was expecting and it breaks my heart that it never came to be.