I have was really busy this last few weeks with this March Madness Bracket I had going. There was lots of calculating votes, lots of writing, lots of research, lots of stuff to do. I don't want it to sound like I am complaining, because that simply isn't the case. I had a ball doing this bracket and I can't wait to see how it comes to a close tomorrow. I have been watching several new releases during the time of creating the bracket, but I never had the time to sit down and write my thoughts down. Now that I have more time on my hands, I plan to write some quick thoughts on the movies I watched while I was also busy with my March Madness Movie bracket. I hope you enjoy. These will be reviews, but a lot less formal and to-the-point compared to what I usually write. I still hope you appreciate my thoughts. 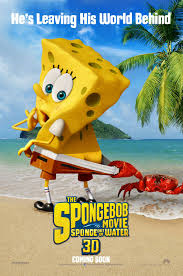 The SpongeBob Squarepants Movie: Sponge out of Water:
I have never sat down to watch "SpongeBob Squarepants" and I only know about as much as my students talk about at the daycare I work at. I have seen bits and pieces of it throughout my life, but I never became an avid watcher. As I saw the trailers for this sequel, I thought it looked like the stupidest thing I had ever seen. The thing is, the trailers really do not represent the movie at all. This is a longer SpongeBob episode for the most part. Most of the movie is animated and takes place underwater, and very little of the movie takes place on land. If your children like this show, they will enjoy the film for the most part. The first and second acts of the movie are very much in the vein of SpongeBob. It is very colorful, very strange and very child-oriented in its humor.

When SpongeBob and several of his friends head up to the surface to stop a pirate (Antoino Banderas) from stealing the Fatty Patty recipe from their restaurant, things get a little too wacky. I wonder what children, especially fans of the show, thought of the sudden reversal. Suddenly, the movie takes a drastic turn and it does not feel like the same movie. Had the movie been completely underwater the whole time, I think it would have been much stronger overall. Still, its a much better movie than I thought, but supremely disjointed. 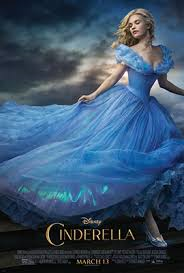 Cinderella:
I had some reservations on this one, particularly because I hate the need to for Disney to recreate all of their classic tales just for the sake of making money. Especially since I have not been the biggest fan of most of the live-action reversals. So I did go into this one with very low hopes.

If you have children who haven't managed to see this one yet, take them immediately. This is a "Cinderella" movie, through and through. Its not a movie with political overtones, it is not a movie with a hidden agenda. It is a movie that only aims to entertain and force its audience to feel the magic. And make no mistake, "Cinderella" is magical. It is big, and colorful and has spectacular cinematography. The work by Lily James as Cinderella is brilliant, as is the work by Richard Madden who I desperately miss from "Game of Thrones." I think Cate Blanchett is the greatest stepmother anyone could have asked for, and while I am usually annoyed by Helena Bonham Carter, she is a stellar Fairy Godmother. There is still a great nostalgic feeling you get watching it, remembering the animated movie. But this new version has a voice and style of its own. It rushes its ending a little too much in order to make sure its target audience doesn't get bored, but overall this is exactly what a "Cinderella" movie should be, and that is a miracle. 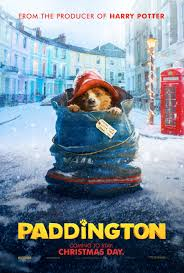 Paddington:
After a disastrous earthquake grips a Peruvian rainforest, a bear (voiced by Ben Whishaw) travels to London in order to find a new family. The Brown family eventually take him in and everyone by he father is overjoyed. Eventually, the bear, who is named Paddington warms the hearts of everyone in the family. And the family helps the bear stay out of the hands of an evil Taxidermist (Nicole Kidman).

This is a movie we have seen a million times before. A dysfunctional family gets a misunderstood being brought into their household and the being helps the family overcome its dysfunctions. Yet, there is something very charming about Paddington. Maybe its how well the ensemble cast does in bringing the story together, maybe its how the movie tries to play things unique in an otherwise predictable genre. Who knows, all I know is that I was overtaken by this movie in a way I did not expect. 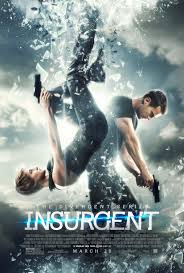 Insurgent:
I saw "Divergent" last year, and I really was not a fan of it. I thought whatever happened in the book was not executed into the movie at all. It had something to do with a post-apocalyptic world and how society was branded off into different factions based off of a person's strongest personality trait. If someone had several traits, they were considered fearless or "divergent" which is bad for the ruling class because...well its not stated well. I guess the movie needed bad guys.

A movie that was built on a terrible foundation usually doesn't create a lovable series and that certainly does not change. "Insurgent" is just as bad as "Divergent" and this series will never reach the level of awesome as say "The Hunger Games." Shailene Woodley and Theo James are not strong enough actors to make this movie count. And the added star power by Kate Winslet, Miles Teller, Jai Courtney, Zoe Kravitz, Naomi Watts, Ray Stevenson, and Octavia Spencer does not help at all. The story feels like every other movie of this type except deflated and forced. Nothing about it sticks out. 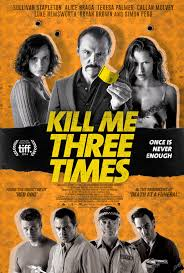 Kill Me Three Times:
I had high hopes for this. I love Simon Pegg and when someone decides to have him play a hitman, I felt that was going to be something perfect. Then there is Alice Braga, Teresa Palmer, Luke Hemsworth (yes, the third Hemsworth brother), Callan Mulvey, Bryan Brown and Sullivan Stapelton. These are some of the best actors Australia has to offer and when they are all starring in a witty crime drama, you have to expect big things.

The thing is, this is just another forgettable post-Pulp Fiction crime thriller. This is a firm definition of all style and absolutely no substance. There is a mystery that forms from not showing us certain faces, which is the most annoying cliché in mystery movies of  this kind, this is a movie where nearly the entire cast dies just for the movie to be cool and stylish things happen just for the sake of them happening. There is nothing about the movie that drives the plot, and really there is not much of one. This great cast is wasted and that is really too bad.