Okay, if you do not dig this format, I am pleased to report that this will be probably be the last time we do this in awhile. I didn't think my Movie March Madness Bracket would have such repercussions so long afterward. It pretty much took over my blog in a big way. I stopped "Who Played It Best?" for a week, my "Essentials" and "Overlooked Film of the Week" froze for awhile. Most of all, as I was seeing new material, I wasn't writing about it. I've been a very busy guy, and I apologize if my blog has not represented that. I have a couple of quick thoughts on two movies I saw last week, then I promise to move back to formal reviewing. I have some movies planned for this week and I am inviting my man Hunter back to discuss "Furious 7," something I can't to get going with you guys. Right now, let me delve into these movies that I saw last week. 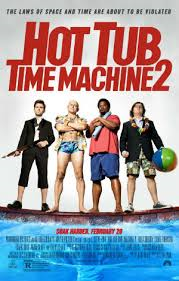 Hot Tub Time Machine 2
I never wrote about it on the blog, but I was a fan of the original "Hot Tub Time Machine." Its not a movie I particularly want to buy or to rigorously see again, but for what it was, I enjoyed. Not every movie has make me gush, and I can let myself be transported by light entertainment. This was never an idea that would ever warrant a sequel, but of course, never bet on Hollywood. Lots of ideas that never needed sequels usually get the sequel treatment. I am afraid that "Hot Tub Time Machine" was one of those.

"Hot Tub Time Machine 2" is sadly one of those sequels that treads water. The themes and storylines from the first movie are the same  themes and storylines explored in this sequel. The characters never mature or change or adjust; they are simply around to do exactly what  they did in the first film. That is the worst kind of sequel in my eyes. I find it lazy to just bring everybody back to essentially do a remake of your own film. I like Rob Corddy, Craig Robinson and Clark Duke quite a bit, and they have some good material in this movie. The thing is that they are just doing a different version of the same story from last time. The movie walks the tightrope between raunchy funny and just being unsettling, and it seems the movie pulls off the later. Plus, I feel John Cusack is a much better leader for this movie, and sadly his character does not come back for this movie. Instead we get his son from the future, played by Adam Scott. I have liked Scott in the past, and he does some good stuff here, his character is just a stand-in for Cusack though, never becoming his own character. I was hoping for a sequel to raise the bar from the first film, unfortunately, "Hot Tub Time Machine 2" suffers from sequel syndrome. 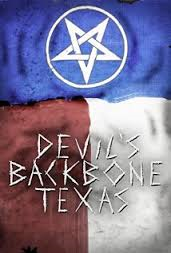 Devil's Backbone, Texas
This movie was kind of confusing from the start. At first, I thought I was watching a documentary. I will give "Devil's Backbone, Texas" this much, it had a very effective found-footage style. I was completely convinced that what I was watching was factual. The story revolves around the passing of Bert Wall, who lived in a territory of Texas called "Devil's Backbone," a land-mass that was said to be haunted. Wall was disconnected from his family and normalcy in particular, because he was wildly obsessed with what he saw at the Backbone. When he passed, he left behind a disturbing house and videotapes of his spiritual encounters and his son tries to find closure in the Backbone, he takes friends with him and he plans to make a documentary about his father and the Backbone in general.

Like I said, it some of the best found-footage imagery I have seen in awhile. Most found-footage movies these days are a little too slick looking, and the illusion of realism is becoming lost in the subgenre, not here. Everything feels authentic, even the faux 1996 Unsolved Mysteries footage shown at the beginning of the movie. As the movie wears on, the pacing really becomes an issue. It never seems like much is going on, and I have to admit I got bored quick. The story was fairly engaging, the cinematography is top-notch and the actors do what they can, but the pacing becomes a serious issue. What also broke my heart was the ending. For a second, I thought I was watching M. Night Shymalan's "The Village" again. The movie plays with expectations a bit, then at the end, those expectations are shattered in order to create a total cop-out. Then suddenly, the movie desperately aims for a shocking twist right before the credits. But the ending falls flat, you can't have an ending go in one direction, then suddenly change that direction radically. In movies, you can never have things both ways, you have to be doing something specific when you tie up your story. No audience likes to be toyed with, especially right when the credits roll. This was a valiant effort and I will surely keep an eye out for this cast and crew again, but that ending got the best of them.