Overlooked Film of the Week-#96
Chronicle 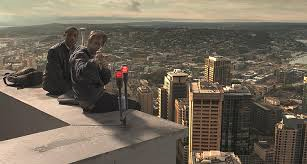 There are people, all over the goddamn place that are already saying that the 2015 "Fantastic Four" film is going to flop. I always love it when people look at a cast or an unexpected trailer and already call shenanigans even before seeing something. Hasn't Hollywood proven itself to be a magic trick every once in awhile? Or is it an organization that has used up all its brownie points? I suppose I can see how this argument could fall either way. I guess I just don't agree with the idea of looking at ONE TEASER trailer (keyword: teaser) and already be able to tell that a movie is going to be bad, I am even more dumbfounded when people look at a cast and say that the movie is going to suck. Back in 2007, I was somewhat drawn to the idea of Heath Ledger playing The Joker, because I could not wait to see what Christopher Nolan saw in Ledger that made him want to cast him for the part. All I needed to hear was that voice and that laugh in the first teaser trailer released online that 2007 summer. Ledger's voice and laugh sold me before I ever saw him in make-up and that purple suit. There have been several times in cinematic history when people cry wolf then are pleasantly surprised afterward. So why is there no love for the upcoming "Fantastic Four?" Even I have reasons for being cautious about it, but none of that has to do with the cast, and I found the footage we got a couple months ago shockingly good. Where the original two movies really that bad?

Well I have a damn good reason to at least be open to liking this new "Fantastic Four," and it is director Josh Trank. What did Josh Trank make? Well in 2012, he made a little found-footage movie called "Chronicle." A movie I find blasphemous because it fell by the wayside.

What is "Chronicle?" Well, it is essentially Josh Trank's resume for directing "Fantastic Four." It is the superhero version of Stephen King's "Carrie." Heck, it put a unique and much different spin on not just the superhero genre, but the found-footage device in movies. When people hear the words found footage, they grown. I know because I am guilty of it too. As much as I love "The Blair Witch Project," it created a sub-genre landscape that has been riddled with crap for several years after. Here, Trank the found footage device but in a completely different genre. He proved that this device could be used in more ways than to scare.

Although I have to admit something here. People going into "Chronicle" expecting a big, bright, heroic superhero movie may be a wee-bit disappointed. This is a movie about three friends, played by Michael B. Jordan, Dane DeHaan and Alex Russell, who accidently stumble upon something they can't explain. Whatever it is, it changed their DNA for good. While there are several scenes of the boys playfully trying to control their powers, this is barely a superhero movie. There are no bright costumes and witty one-liners. The villains are not really supervillains, the villains are the characters themselves. This is a character study about how certain people react to a sudden, permanent change. Sometimes that change can be good and sometimes it can be bad, it all depends on how you perceive and use that change. At least, that is what I got out of this movie.

I will admit that there is a big action set piece at the end that fun to watch. But at the same time, it is realistically brutal. There is no beaming score that underlines the action, it all takes place in a music-less landscape. The flying of cars and people and the sudden destruction of downtown Seattle may seem unrealistic and I am flabbergasted by the incredible detail. Of course, the power to move things with your mind is not real, but the visual work done in this movie will make you believe it can. Despite how good the action and special effects are, I loved that Trank brought it back to the characters every, single time. He creates characters who are easy to identify with, I thought and gave each of them something important to do toward the plot. This is why I feel with all my heart that Trank is the right man for "Fantastic Four." He proves that he can juggle several big personalities and he can make unrealistic situations come off as real. What more is needed really?

I also think, judging from this movie, Michael B. Jordan is going to be an excellent Human Torch. He is every bit of excellent in this movie. And Dane DeHaan? He proves big time why he is one of the best actors of his generation and why you saw him almost everywhere after this movie came out.

So give this movie a chance and if you like it, I bet you will give "Fantastic Four" a chance too. Josh Trank is going to be an interesting voice in the future, I am sure. This is his beginning.