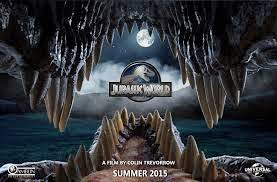 A new trailer has landed today for "Jurassic World" and, for the most part, it looks pretty cool. We see several scenes of Chris Pratt's character in action, and I think Pratt is going to be one of the best things about this movie. He's got great charisma and he's been a good streak lately. No matter what I end up thinking about the movie, I am more than confident to say Pratt will dish out a solid performance. We also see that there is going to be some human vs. dinosaur action, which could be pretty cool. We don't see too much of the fighting, which makes me think we haven't seen all of the "money shots" the movie has to offer and I truly hope that is true.

The thing is that I am still nervous about this movie. The trailer reveals a little bit more about the story, and it still comes off to me as an excuse to set humans on the island, then have the dangerous dinosaurs break out. Each sequel to this series has just come from the same template as the first film. After reading the earlier ideas for "Jurassic Park 4," I knew Universal was playing with the idea of taking the franchise in a different direction, and that was exciting. I am just hoping that after all these years, they didn't wait just to make more of the same. Don't get me wrong. Dinosaurs? Cool. Chris Pratt? Cool. Chris Pratt's character controlling raptors? Even cooler. But I want this coolness to not just be fluff, paving over the same story we have seen three times already.

I hope I am wrong, because I want to love "Jurassic World." They have great visuals, it looks like the movie has some great energy. They have also put together a stellar cast. But will all of this service just another island-style monster movie? I sure hope not.

Check out the trailer:


Posted by Shawn Hoelscher at 5:42 PM