Movie March Madness: Heroes vs. Villains. The Winner is... 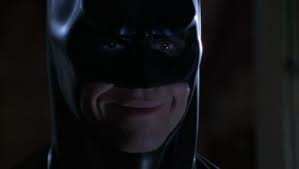 Batman has just been crowned winner of my first ever Heroes vs. Villains March Madness bracket. Good has triumphed over evil and Batman has claimed himself the ultimate hero of screened entertainment.

When this all began a few weeks ago, Batman was the fourth seed on the Movie Heroes bracket, sitting under James Bond, Luke Skywalker, and Indiana Jones. In the first round, he was able to eliminate Pete Venkman from the competition, taking nearly all of the vote. In round 2, Godzilla surprised his competition by eliminating Atticus Finch, a way higher seed, from the competition, pitting himself against the Dark Knight. Alas, Godzilla's terrifying height and strong superpowers could not stop the onslaught of the Caped Crusader, as he garnered another hefty load of votes away from Godzilla in the second round.

Batman advanced to the Sweet Sixteen with a fair amount of ease. But how would our Dark Knight due against the likes of James Bond? It was an insanely close vote, but Batman was able to obliterate the MI6 agent, winning the votes by a mere percentage. When Batman advanced to the Elite Eight, he went on to face Gandalf, the most powerful wizard of all Middle Earth. How would the Batman fair against one of the most powerful wizards around?

Apparently, he faired pretty well, but it was a hard earned fight. Batman defeated the wizard by five percent of the vote. After Batman defeated so many honorable combatants, he went on to face counter-terrorist Jack Bauer, who destroyed the competition in the TV Heroes bracket. How would Batman do against a successful anti-terrorist? The answer is pretty, freaking well, as Batman was able to gain almost all of the vote away from Jack Bauer.

Batman was finally tested against the Father of all villains, and I mean that in every sense of the word. In the final round, Batman was the last hero standing, and he went off to face-off against the last villain left standing. That villain was Darth Vader, and it seemed at the time that the vote could have gone either way, but Batman was able to claim victory by gaining 70% of the vote. After a long, hard-fought battle, Batman was victorious in my first-ever Heroes vs. Villains bracket.

Thank you all for voting and having fun with this bracket over the last few weeks. I am happy for those of you who participated and I hope you were able to have fun with it. Batman will return next year to defend his title against...whomever decides to show up. Tune back in next year.

Check it all out from the beginning:

Posted by Shawn Hoelscher at 7:58 PM