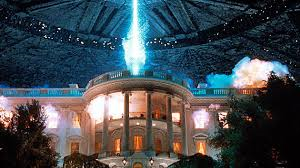 I have talked at great length before about my love for "Independence Day." I have discussed how much it rocked my world at the age of 6, how I watched it every Saturday morning instead of cartoons. How I worshipped it like it was some kind of cult. I was disappointed growing up over never getting a sequel. For as much as director Roland Emmerich always talked about it, I never thought it would actually happen.

Well its been happening over the last couple of years and it seems Emmerich has some casting locked down. It was announced awhile back that Jeff Goldblum would return, that it is likely Bill Pullman will return and that Vivica A. Fox will return. That is all set in stone. The veterans of this franchise will join Jessie Usher, Travis Trope, Liam Hemsworth and Charlotte Gainsbourg, which is all exciting to me. I also remember reading that Emmerich wrote two versions of the script, one featuring Will Smith's character and one not, and it seems like I know which version they will be making.

Today, the cast got a little bit bigger. It appears actress Joey King, who was in "The Conjuring" and "White House Down" has joined the cast in an unspecified role and also Brett Spiner has joined the cast. Brett Spiner is famous for playing Data on "Star Trek: The Next Generation," but the goofy thing is, he was in the original "Independence Day" movie. Remember Dr. Okun? The scientist on Area 51 who got a little wacky at the end, and died? Yeah, that character was played by Spiner. So if his character died in the original, how is he in this? Will there be a flashback scene? Will Spiner be playing Okun's evil twin? Or will the movie just pretend like Okun never died? Honestly, I can see a summer blockbuster going down any one of those avenues. We will just have to wait and see.

What I really want is to see a trailer for this sometime soon and an official release date. I have big hopes for this one, even if the time to make this a series came a little too late.

Posted by Shawn Hoelscher at 11:51 PM