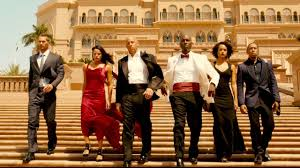 I figured that this would be an emotional viewing for me. As many of you, I was shocked by Paul Walker's death. It was something absolutely nobody saw coming, and was completely off-the-map until it happened. This event reinforced how precious life is and that we have to have too much fun everyday, since we never truly know when we are gone. I feel extra bad because I felt like I had to warm up to Paul Walker, but I always absolutely loved  his work on the "Fast and Furious" franchise. I could not wait for this year to see him fill Brian O'Connor's boots one last time.

What a heck of a time too, because "Furious 7" is loads of fun.

I have said it before and I'll say it again, I liked the first "Fast and the Furious" movie. I was not such a fan of the second entry in the franchise and I found part three and part four to be strikingly mild. It seemed Universal decided to kick back and have a little more fun with the franchise. They traded grittiness for flair and fun. They created movies that felt like summer blockbusters, all across the board. Ever since part five on, this has been a franchise to get giddy about, and I never once thought I would ever say that about this franchise ten years ago. The "Fast and Furious" franchise is a Hail Mary franchise. If there is somehow a way to keep it going and get parts eight and nine as rumored, then I'll be ready for it.

What I liked about "Furious 7" is how it connects to parts five and six. The first half of the "Fast and Furious" franchise felt very disjointed, adventures with the same characters featuring the "Fast and Furious" trademark. That doesn't happen anymore. Part five lead to the team finding out Letty (Michelle Rodriguez) was alive, part six lead to the rescue of Letty and the conflict with Owen Shaw (Luke Evans). This leads us to "Furious 7" in which Owen's brother Deckard Shaw (Jason Fucking Statham) wants revenge. We find out that it is Deckard Shaw was the mastermind who murdered Han in "Tokyo Drift" and now he's coming for everyone else associated with Dominic Toretto (Vin Diesel). Dom is approached by Mr. Nobody (Kurt Russell) who recruits Dom and his crew to regain hold of the God's Eye, something Deckard Shaw wants and has sent mercenary Mose (Djimon Hounsou). Mr. Nobody wants Dom to get ahold of the God's Eye, stop Mose and he will assist the crew in stopping Deckard.

It sounds kind of complicated, but it really is not. This is a story just right in fitting into a summer blockbuster. It is also incredibly fun the whole way over, there are great one-liners, big action scenes and of course awesome cars. What more would you want from a movie like this? The biggest complaint I have is that the third act is kind of a let down. The big "holy shit" moments in the entire movie are all mostly in the trailers. The big street brawl at the end of the movie is not as epic as I had hoped, but it is still pretty epic.

What can I say about the actors work as these characters when it comes to Diesel, Walker, Rodriguez, Luda, Jordana Brewster, Tyrese Gibson, and The Rock? By the time a seventh movie comes out in an ongoing franchise, it is safe to say that the core actors in the franchise connect to their characters in a second-hand nature way. I think its save to say of all the actors who have are seasoned veterans of this franchise. I don't need to tell you how good each of the actors above are, because you already know that they are these characters by now. I can tell you that Jason Statham creates an iconic and nasty villain. I can tell you I loved everything about Kurt Russell's small but memorable time onscreen. I liked Hounsou showing up and even Ronda Rousey has a nice scene in the middle. I liked that we got to see Lucas Black return to the franchise, even it was for a brief moment. And anybody who loves Nathalie Emmanuel from "Game of Thrones" will be pleased with her here.

What got me though was the emotional send-off to Paul Walker's character at the very end of the movie. They give his character an honorable and emotional exist to the franchise. I am glad that they didn't just simply kill his character off, I think the ending they chose for him will honor his family and the cast and crew he has worked with for so long. If you have been a Walker fan, you will be pleased by it as well. All in all, if you have liked this franchise so far, you are going to really dig this latest entry.