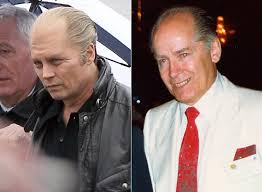 Johnny Depp is famously, and in some cases infamously, known for playing the weird characters. He always finds the weirdest, strangest, most eccentric characters and breathes life into them. He has done this for son long that when a relatively normal character comes along (i.e. "The Tourist" and last years "Transcendence") Depp ends up coming off bored. But, even if most people think Depp as a one-trick pony, he still making lots money, working often, and several are still hailing him as one of the best actors of all time.

Every once in awhile, I feel he allows himself to flourish. One of my all-time favorite Depp movies is "Once Upon A Time In Mexico." Where he plays a CIA agent in Mexico trying to destroy the entire power struggle of the country and have it start anew. He does really great work in it and he is playing a relatively normal character. Yes, I will admit the CIA agent he plays is a little quirky, but the quirk works for the character, not against it. Plus, all movie long, Depp is funny, dramatic and even a little bit badass. I've been hoping for him to catch that vibrant energy he had in the movie and I figured I'd be disappointed forever.

Then I saw the first trailer for "Black Mass" and it seems that after 10+ years, Depp is actually acting again, instead creating a wildly eccentric persona. Johnny Depp will play James J. "Whitey" Bulger. A character you may vaguely remember from "The Departed." Bulger was a real-life mob boss who ran Boston for several decades. One of the key ingredients for his success was his brother who infiltrated the FBI. Eventually, Bulger lost his power and went on the run, and he was number two on the FBI's Most Wanted list until his capture in 2011. I should mention that he was number two only to Osama Bin Laden, which should speak for itself on how powerful and ruthless he was. Bulger wasn't just the worst gangster in Boston, he was one of the worst gangsters of all time. And it seems Depp really wants the audience to see that.

No, this will not be a "Departed 2.0" "The Departed" was actually a remake of a 2003 Hong Kong movie called "Infernal Affairs" which dealt with one man pretending to be a cop for the Triads and another bad-boy as an undercover cop. That film dealt with what happens when those opposing forces find out about each other and I think Martin Scorsese did a good job of translating that out. Jack Nicholson's character was loosely (and I do mean loosely) based on Bulger. Besides some similarities and both movies taking place in Boston, don't expect the same movie twice. "Black Mass" is going to be a historical drama focusing on the real Whitey Bulgber. "The Departed" was a half remake/half historical drama with someone somewhat based on Whitey Bulger. Both movies are going to be different, and after this first trailer, I am wildly excited for "Black Mass."

Posted by Shawn Hoelscher at 8:05 AM