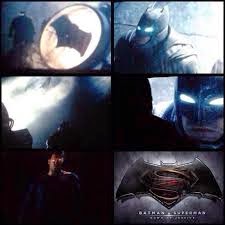 What a great week to be a fan of superheroes and their movies.

We had some big announcements with the "X-Men" franchise, we got a full-length "Ant-Man" trailer the same day. Now, on a Friday no less, we get our first trailer for "Batman vs. Superman: Dawn of Justice" a few days earlier than we were told we would. Of course, all of the trailers and announcements are great news. Yes its true, Zak Snyder released this trailer because it got leaked, or something of the sort. No matter. We got the trailer and it is glorious.

I love the opening of the trailer, as we hear faceless voices debating the merits of the Man of Steel, Superman himself. As the camera inches closer and closer to a colossal statue of Superman, with the words "False God" spray-painted in red on his chest. Its interesting since as lines are drawn on whether or not Superman is a hero or a villain, the same lines are being drawn on whether or not this is a worthy franchise in general. I love that "Batman vs. Superman" will be a direct sequel to "Man of Steel" and it seems the movie will tackle the issues brought up at the end of "Man of Steel." Whether it was intended to be that way or not, I love that Snyder is going for it.

Let's talk about "Man of Steel" for a moment, because it isn't like your average Marvel movie. This isn't a superhero movie that was heavily embraced by every human being on the planet. The movie divided viewers almost across the board and the last thirty or so minutes of the movie have been highly controversial. I am one of the people who actually loved "Man of Steel" and if you are paying attention, I think the ending exposed something very important about a ordinary being becoming a superhero. I didn't just ignore because of all the relentless action, which I believe some people did. Because, I guess huge-scaled devastation to a city has never happened in any superhero movie before "Man of Steel" (Sarcasm)

I like that the trailer for "Batman vs. Superman" is bluntly stating that the DC Cinematic Universe is not going to be anything like the Marvel Cinematic Universe. Good. They shouldn't be alike. The worst thing Warner Brothers could do is simply mimic Marvel. Snyder is embracing the tone and atmosphere he helped set up in "Man of Steel" and I can't wait to see Snyder plans to build on the world he helped create a couple years ago. Yes, this is going to be a different type of superhero movie, but DC and Marvel are very different comic companies, and those differences make both companies great. Which is why I always laugh when people try to say that "Superman wouldn't do that" when it comes to this new franchise. Superman wouldn't do that because...why? Because Richard Donner never did it in his movies? I think part of the reason why so many people didn't jump on the "Man of Steel" bandwagon was because "Man of Steel" is nothing like the Superman movies Donner made, but that is something I dig. I don't need a Donner-reshoot because I saw all the Donner movies. "Superman Returns" tried to recreate that Donner anesthetic and that is part of the reason why that movie failed. This new franchise is trying something different and I am glad Warner Brothers and Snyder himself are not wavering from that.

It's trailers like this that make me sad that 2016 is still so far away. But I think I can rest with a little more ease knowing that "Batman vs. Superman" is in the right direction. I hope that direction is well realized by this time next year.

Posted by Shawn Hoelscher at 9:07 PM