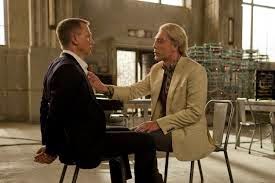 I think over the course of this weekend, I watched the trailer for "Specter" close to a thousand times. I am so ready to see "Specter." I am excited not just because its a new James Bond film with Daniel Craig, not just because it will be our second look at the brand-new Q branch, not just because the villain of the film will be portrayed by none other than Christoph Waltz. As I explained on Friday night, I love the Craig films because his movies are telling one story between his four films. Specter is somehow connected to Quantum, and the character Waltz plays has some connection to Bond growing up on Skyfall ranch. How these big puzzle pieces collide is the reason why I have to see this new Bond film tomorrow.

I was enlightened by my love for this franchise that I spent last night watching "Quantum of Solace" and "Skyfall." I have written previously on this blog about the former but I never gave my thoughts on "Skyfall." I have several friends that have not dug the Craig movies simply because they are so radically different from the rest of the franchise. Honestly, I find that not to be true. The Bond franchise has always been a reaction to whatever time the movies are set in. In the Connery/Lazenby era, we see a lot of Russian intrigue in the films. In the Moore era, we see a lot of reactions to the Space Race and the psychedelic weirdness that was the 1970's. The Dalton years were gritty, as most action films were during that time period. The Brosnan era dealt a lot with how the world changed after the Berlin Wall fell down, and also tried to begin homaging the crap out what came before.

So where does that leave the Craig era? Well for one thing, the Craig movies love the close-quarters combat. Honestly, I have to say I do too. I like this type of action, I like that for the most part we can see what Bond is doing instead of several quick snapshots. I like how this action is both grounded in realism, but still takes time to soak up the adventure we crave in all Bond movies.

But the hard truth is that the Craig movies are not concerned with lasers from space, it is not concerned with clichéd villains who have underground layers in volcanoes. The Craig movies have really embraced the time and world we live in now to tell its story, and they really nailed it. I think one of "Skyfall'" best scenes is the moment when M (Judi Dench, giving her best performance as the character ever here), gives a speech about how the enemies of the free world are not countries anymore, they are individuals. Think about it, there is no country called al-Queda nor is there a country called Taliban. These groups of terrorists are made up of people from all over the world, of all different races (that's right people, different races) and they operate in the shadows. The best defense for this type of enemy is to be in the shadows with them, which is what M is trying to argue. When a fictional movie can still embrace the world's climate and use it to its advantage is something I find very bracing.

Then there is the work by Javier Bardem. I think Bardem was born into this world to breath life into the villainy of Hollywood. No matter what movie he's in, whenever he's being bad, you can't take your eyes off of him. His opening speech to Bond about the survival of rats is some of the hypnotic work Bardem has ever done. We feel how loopy he is, and we feel his madness as an audience member. It seems Bardem knew he had one of the richest characters to play ever and he wanted to fly with it. So that's what he did, he flew.

I think another thing that throws people off of "Skyfall" is that Bond is never really on a mission. This is a movie about the soul of what Bond stands for. This is a movie about discovering who you really are after confronting your past, and that is something that goes for Bond and M in this movie. How the stories of M and Bond parallel in this movie is the biggest reason to watch it. I think as "Skyfall" ends, it is a promise. A promise that to all the Craig haters that the template they know and love is coming. Craig's Bond had to get over his love-sickness of Vesper and he had to confront his shadowy past in order to become the Bond we recognize, but it has been an extraordinary journey. I think many years from now, the world will rejoice on how awesome Craig's run really was, and how titillating it was.