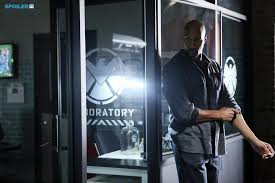 Tonight's episode of "Agents of S.H.I.E.L.D." was kind of a mixed bag. I am not sure each show on television can juggle a multiple narrative. There are some shows, like "Game of Thrones" that can handle telling two or three stories in one episode. Part of that has to do with the fact that they don't have to worry about commercials. But I think a bigger part of that has to do with the writing team behind the story. How many shows and movies for that matter, pass or fail has to do with the writing. If the writing is sloppy, there is not one performance that can milk the characters or one director who can make the message clear. Sure, there are exceptions, as there are for just about everything, but those exceptions are rare. I am just not sure if the writers behind "Agents of S.H.I.E.L.D." really can handle multiple storylines in one episode.

For instance, we finally learned who Bobbi and Mack are answering too, as did Lance Hunter. Edward James Olmos guest stars as Robert Gonzales, the director of the "Real S.H.I.E.L.D." No, this real S.H.I.E.L.D. is no faction of the bad guys, but they certainly up to no good. This real S.H.I.E.L.D. wants Coulson out, because he apparently has too many secrets, even though they are working for a espionage agency, which seems like odd motivation for someone not to be director. But anyway, the real S.H.I.E.L.D. doesn't trust Coulson and they want Lance Hunter to join them. Hunter is still feels committed to Coulson, and I am starting to get the feeling that Lance Hunter is going to replace Grant Ward as the male badass of Coulson's group. I thought it would be Triplett, but it seems Marvel had other plans.

This would have been an interesting story to focus on, if we didn't have to pause to see what Grant Ward and Agent 33 are doing. I really felt we spent way too much of the episode watching Agent 33 get her face fixed, as well as the tension between a possible romance between her and Ward. The last thing I want from this show is a love story between these two. In fact, I really feel that Ward is starting to wear out his welcome. I loved his big twist in season 1, and the show really needed something that would flatline the audience, but they didn't kill him. So now what? The show doesn't seem to know, and he is starting to feel more like an anchor than anything else. If it were up to me, I would kill Ward by the end of this season. Brett Dalton had a great run, but it doesn't seem like anything else interesting can be done with him, and since he did what he promised Skye, I feel like his story-arc is complete. Its never good when a character is more of an footnote than an actual part of the story.

Then there was the story of Skye being brought into seclusion. It seems that Coulson's team is split hairs on what they feel should be done about Skye and her newfound powers. So she is brought to a secluded cabin for...well, that is never quite explained. There is a nice Easter Egg this episode which is teasing Quake, big time. We definitely felt bad for Skye as the show has done a good job of making her relationship with Coulson matter. But this part of episode came off so slow that I want to just fast forward and have Skye be Quake right now.

So a little bit of a sluggish episode overall, but still not bad. It seems like next week is going to be very compelling and I am engaging in this Coulson's S.H.I.E.L.D. vs. Real S.H.I.E.L.D. storyline and I am crazily curious to see how that particular arc plays out. I can really do without the Ward and Agent 33- sitting in a tree storyline. I still like Skye's origin, I just want there to be a deeper focus, and something that isn't apart of several other story threads. What did you all think?