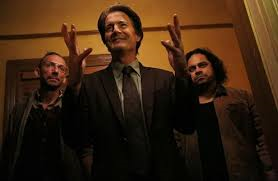 Last week, the truth about Skye was revealed to the entire team, Jemma and Leo's friendship became rocky and Hunter got kidnapped by Mack. All the while this all has been happening, Skye's father has been really busy...

There is a good reason why tonight's episode was teased as "Supervillain Tuesday." Calvin Zabo, Skye's father, has been gathering former prisoners of S.H.I.E.L.D. People who felt wronged by the organization, for one reason or the other. This gathering was for a single purpose, to destroy what Coulson has been trying to create this entire season, a new working and breathing organization. Tonight we meet Francis Noche; somebody who experimented with illegal steroids, Karla Faye Gideon; who has razor nails, Wendell Levi; who is good with computers and David A. Agnar; who has a tremendous singing voice. All were characters from the comics, but not especially popular ones. Sadly, they do not really get fleshed out as characters. They are like the brotherhood of evil mutants in Fox's "X-Men" franchise. In those movies, most of Magneto's henchmen stand around behind him, and this episode reminded me of that.

We also got to meet Melinda May's ex-husband, a psychiatrist named Dr. Andrew Garner. S.H.I.E.L.D. wanted Skye to talk to Dr. Garner in order to find a way to surpress her powers a bit, perhaps find a way to control them better. In the comics, Daisy Johnson has control over her powers and uses them to masterful affect, and I like Skye's quasi-origin story she has going on. I also liked that this episode fleshed out May as a character and that there is more to her than just being a hardass/badass.

Then we get a brief glimpse of what it is that Mack and Bobbi are up to, and I am happy to report that they are not bad guys. No, Bobbi and Mack are not HYDRA, or Leviathan or any sort of terrorist group, so rest easy fans. But they are not exactly on Coulson's side either. It looks like there are other S.H.I.E.L.D. factions out there, and they all want to create a better world free of HYDRA. The thing they don't trust each other and they want to rule supreme. This is a story arc I can see playing out into next year, something that runs simultaneously with "Captain America: Civil War." Last year, season one ended with all the good guys standing together smiling, looking into a hopeful future. I have a feeling that by the end of season two, not everybody is going to be smiling. I don't think the future will look very hopeful. I think friendships will break and  heroes will divide. How, exactly they divide remains to be seen.

What did you think of tonight's episode?