The Boy Next Door Review

The Boy Next Door Review 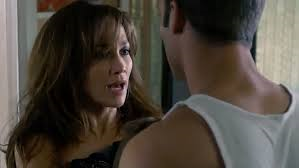 I watched "The Boy Next Door" a couple nights ago. Honestly, I have been dragging my feet to write about it.

I really don't know how to talk about it. I bet you all know what I am about to say before I say it. As much as Jennifer Lopez has made a successful career as a pop music artists, it seems her career as an actress has been stagnating since its birth. Why she continues to embarrass herself as an actor is beyond my comprehension. I don't think she has ever made a good decision as an actress personally. I really wonder if she truly thought "The Boy Next Door" was going to be entertaining or if she just got offered lots of money to be in this.

Jennifer Lopez plays Claire Petersen, a English high school teacher who finds out at the beginning of the movie that her husband (John Corbett) has been cheating on her on his business trips. This creates a wedge in their relationship. It isn't easy that they have a adolescent son in high school and having to choose between both of them after so long is straining. Claire gets her son most of the time, while the husband gets him on the weekends. Claire is settling into her new normal when Noah (Ryan Guzman) shows up one day, being the nephew of Claire's elderly neighbor. He soon befriends Claire's son and assimilates himself in Claire's life. Things get hot and heavy between Claire in Noah one night, despite the wide age-gap between them (Noah is a high school student, mind you), and Claire tries to call it off.

Oh, Claire, you didn't think it would be that easy did you?

What follows is a predictable "horror" movie where Noah becomes a mega-stalker and tries to ruin Claire's life in order to be the man of her dreams. This is essentially one of those creepy Hallmark movies with a bigger budget. There is nothing anybody in this movie does that reinvigorates the stalker movie. There is nothing new, original or creative going on anywhere in this movie. This is a movie that goes through the motions strictly to go through the motions. Seriously, what's the point? Was there any money involved in this project at all? I can't imagine Jennifer Lopez is much of a brand name since she has not been in a good movie...ever.

What makes "The Boy Next Door" hard to watch is that it is every character is unlikable, which means we have nobody to identify with. Claire's husband may be a big, fat cheater, but Claire has sex with high school students. Sure, Noah is of age, but that doesn't make it any less creepy. It also doesn't matter if Claire is a good looking teacher, it is still creepy. The way Noah freakishly tries to hold onto her is equally creepy. Even Claire's best friend's motivations in the movie are self-serving to a degree. There is literally no beacon of light anywhere in this movie, which makes it depressing to watch.

Jennifer Lopez, is she good? I wish I could say yes, but she other than a pretty face, she has absolutely nothing go for her. I can't really wrap my head around the fact that she continually gets work, because to a degree, she plays the same character, and she does a bad job. She is either the star-crossed romantic lead or the over-protective mother. That has been her acting career, and after so many years, she has not mastered any persona. Noah Guzman spends the entire movie overacting, and he never comes off as a legitimate threat. When an actor is trying to come off tough, and he makes the audience snicker, that is usually a bad sign.

I guess I knew this would be terrible, so I really can't say that I am surprised by anything that happened here.