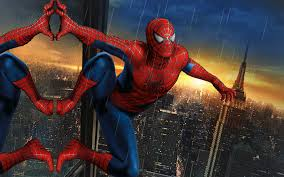 There has been a whirlwind of discussion about "Spider-Man" today and how he will fit into the Marvel Cinematic Universe. As you all know, when this was announced a few weeks ago, I pretty much lost my mind. I understand why it some people found faint praise in it though. Lots of people want to see characters we haven't seen drawn out in the MCU. I totally understand and I totally agree. But I got hope when Marvel announced that they are not canceling any of  their Phase Three projects, they just did a little shuffling around. Spider-man, to me, has always been one of the pillars of Marvel, its just not any type of "Marvel Cinematic Universe" without him. This is also the reason why I wish Fox would cooperate and let Marvel have the Fantastic Four and X-Men too. But, we as Marvel fans scored a small victory a few weeks ago. Now, not only are we still getting Captain Marvel and Black Panther and Doctor Strange in the MCU, we will also get Spider-Man, so we all get to have our cake and eat it too.

Let's talk about the plan a little bit now. There has been a flood of rumors coming out today and I want to discuss some of it. Drew Goddard has been chosen by Sony to take the helm on this new Spider-Man reboot. Goddard started his career in television, writing for shows like "Lost," "Alias" and "Buffy The Vampire Slayer." He then got into writing film and wrote "Cloverfield," "The Cabin In The Woods" (which he also directed) and World War Z. Now, I haven't fallen in love with all of that, but I know enough that Goddard is an interesting voice and I think he could make a helluva Spider-Man movie. He is also the executive producer and writer of the "Daredevil" series coming out next month, so its no surprise Marvel wanted him for this. It seems that this new reboot will be called "The Spectacular Spider-Man" which seems to fit the flow that Sony has been doing for awhile.

Here is where things get a little unclear. Some reports are saying that Marvel and Sony are saying they want to cast an actual teenager for the role, while other reports are saying Dylan O'Brien is all but locked today. There are also rumors that Iron Man would make an appearance in this new "Spider-Man" movie and that new plan have been created to release a new "Spider-Man" film every year starting in 2017. I hope that last part stays a rumor. I don't want Marvel to bulldoze all of their plans just to fit Spider-Man into their story. I want him to fit in slowly and gradually, and I don't want his participation to come at the expense of another character(s) Marvel is planning to introduce.

More than anything, I hope this franchise feels like "Spider-Man" again. Spider-Man is not some epic character who fights for the worlds sake. He is street-level hero and I hope this new franchise embraces that. Sure, he's helped the Avengers plenty of times and he has fought an alien or two. But Spider-Man mainly fights street-level threats and I think "The Amazing Spider-Man" suffered from being way too epic. I do believe now that Marvel and Sony are working together, we will get the Spider-Man we know and love.

More on this story as it occurs. Can't wait to learn more.

Posted by Shawn Hoelscher at 8:30 PM