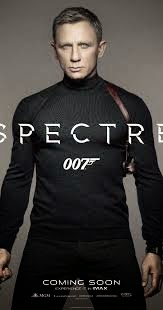 Our first big look at "Spectre," the upcoming James Bond film has landed tonight, and it is glorious.

We don't see too much, but from what we do see, it is enough to wet our appetite. Although I will admit, there are some things that I find a little puzzling. I am huge James Bond fan, I always have been. But I'd be lying if I tried to sell the idea that I loved every single movie and agreed with every single choice that has been over the last fifty years. I have the entire Bond collection on blu-ray, and some are harder to sit through than others. Personally, I prefer the Connery era the most, George Lazenby's one-note is fun but is overly-long and little weird. The Moore era was so cartoonish that its hard for me to take any of it seriously. I don't mind the Dalton era, even though they don't really feel like Bond films. I think Brosnan gets a bad rap, even though he starred in the worst Bond film ever.

Craig's era has been good so far, and I think one thing that is throwing the haters off is that Craig's era of movies are all telling one gigantic story. If you look at all the other Bond films, it feels like you are watching a massive television series. The movies were basically a day-in-the-life-of-a-case for James Bond. But Craig's movies are interesting because they build on each other and we are learning more from Bond as character than we ever have in the history of the character's pantheon. That is wild fun, but it also gives me a reservation.

Telling from the teaser, it looks like we are going to venture more into Bond's past. Whether or not Christoph Waltz is playing Ernest Blofeld or not, it seems that Waltz' character has some kind of personal connection to James Bond. That is either going to make the movie cool or it is going to make the movie suck. Tying any film's villain to the hero personally is beginning to become an annoying cliché than a meaningful twist. If you are not a mega Bond fan like me, then you might not know that Spectre is the name of a powerful criminal organization that has plagued Bond all throughout the history of the franchise and the head of that organization is Ernest Blofeld (Dr. Evil in "Austin Powers" was a parody of Blofeld). We know that Blofeld is coming, but if this new film tries to connect Blofeld to Bond just for the importance of plot, its going to feel a lot similar to when Burton decided to have Joker kill Bruce Wayne's parents. Its drama for dramatic sake and not creative sake. Of course, execution and context is everything, so I guess we'll see.

Check out the trailer for yourself, and tell me what you think.


Posted by Shawn Hoelscher at 9:20 PM