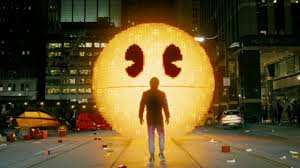 There is a little trailer going around the internet, it has been live for a couple of days now. It is hitting record numbers of views over those small brackets of hours. I have heard people praise what they have seen and I have heard others bash it. Hey, some of the movies we call classics were polarizing when they first came out, only time tells which films will stand and fall.

"Pixels" is exactly how it sounds, it is a movie where characters from old-school video games try to take over the Earth, and it is up to the worlds top gamers to thwart their plot. As silly as it sounds, this movie is going to be a comedy. A comedy with Adam Sandler, Kevin James, Josh Grad and Peter Frickin' Dinklage. If the movie is already silly, why not celebrate? This could be a radical return to form for someone like Sandler, and if Dinklage signed on, that has got to mean something right?

I think "Pixels" has the potential to be a really good time at the theater, and I bet when summer rolls around, that is exactly what I will want.

Posted by Shawn Hoelscher at 10:40 PM