Overlooked Film of the Week-#95
Signs 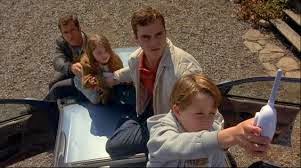 I am sure many of you are wondering why I bothered using this movie as a discussion board for my blog. In my book, M Night Shyamalan had three great movies, I think "The Sixth Sense," "Unbreakable" and "Signs" are all great movies, that is correct, great. When I was younger, having seen all three of those films, I knew M Night Shyamalan was going to be the next big thing. There were magazines that summer in 2002 that were already calling him the next Steven Spielberg, and I did not have any reason to believe otherwise. "The Village" was a strong step backward, not an abomination as most people I knew called it in the summer of 2004, but definitely not on par with Shyamalan's other three efforts. It seemed the surprise ending(s) felt forced instead of natural and for some reason, Shyamalan insulted his audience a little too much in that go-around, still there was some stuff I found to be of merit. "The Village" recently popped up on Netflix and I have wondering if I should give it another shot after all the hype and hoopla around it has died down over ten years later. For me, Shyamalan really went downhill after "The Lady In The Water" and he progressively got worse and worse. He is nowhere near Spielberg anymore and it was sad for me to watch a unique talent vanish away so quickly. When somebody is so promising at the start, it feels like a taste of things to come, and I am still befuddled by the belief that perhaps the best Shyamalan days are behind him.

Still, I have "The Sixth Sense," "Unbreakable" and "Signs." Depending on who you talk to, some will say that "Signs" was the first terrible Shyamalan movie, but I disagree. I can understand why people don't like it. I can understand how they can get hung up on the aliens and their weakness that leads to their demise. As I am sitting here now, I am still trying to find a pressing argument that can explain why aliens would come to harvest a planets inhabitants when water kills them and the planet we live on is 90% water. I bet lots of people get hung up on how the aliens would harvest us if our bodies are made up of so much water. Both very valid arguments, but I think we are focusing on the wrong ideas.

"Signs" is not about an alien invasion, far from it. This is a movie about a family who rekindle their faith in the wake of a extraordinary situation. What happens to Graham Hess (Mel Gibson) at the beginning of the film is a tragedy and I think its pretty understanding why a priest put through the wringer would lose their faith. But when a heavy situation breaks a person's faith, it takes an equally heavy situation to rebuild that faith. That is what makes "Signs" so challenging to watch sometimes, so provoking to watch. There is a deeply religious experience going on in the farm of the Hess family as they barricade themselves in the house, awaiting whatever is coming after them. How well Mel Gibson does as Hess, how his faith is challenged and how he develops as a man throughout the course of the film is what "Signs" is all about. Its clever how the trailers for the film gave one conclusion, but the film was something else entirely.

I love the theories that have popped up since the movie, and I think it is safe to say that perhaps the "aliens" in "Signs" were not aliens at all. There is an impressive theory that is just as old as the movie stating that the aliens in "Signs" were actually demons. Sure, the theory gets a little weird when it tries to argue that Graham's daughter Bo (Abigail Breslin) is some kind of angel who blesses all the water she leaves lying around the house, but demons instead of aliens is somewhat of a valid theory. In the eyes of Graham Hess, whether they are demons or aliens, he feels he is witnessing pure evil. This pure evil can come any form and it tests the limits of Graham and his family. There are many people today who don't believe in aliens or UFO's and believe that they are merely aliens themselves. I think it is interesting to note that every character that Graham or another character encounters has a different theory on what the signs mean. A military commander believes they are an invading army, the librarians think it is a hoax, so on and so forth. In the midst of a unspeakable occasion, many people put their own face on what the occasion means, and I love how that is depicted in the movie.

Visually, "Signs" was a movie before its time. Tak Fujimoto is easily one of the very best cinematographers in the business and its a shame that he doesn't work as often as he should. He makes each image in the movie breath-taking and even adds to the suspense of others. The music James Newton Howard is exactly the type of score I want in a movie like this, its moody and creepy and highly disturbing. It adds to the flavor of the movie in a big way. This is also one of Gibson's best roles in a long time and I think this is a bright highlight in his already splendid career. I also like the work of Joaquin Phoenix, Rory Culkin, Breslin, and Cherry Jones. This was also the last great surprise ending Shyamalan ever had.

I think if we all give "Signs" another shot, I think people would be impressed by how much of it actually worked. I know its hard not to sigh when trying to watch a Shyamalan movie, I know how hard it is to get excited for his movies. That makes me sad since I firmly believe he once had so much promise. But we should never forget the good he was able to bless us with. If you watch this from a different angle, perhaps you may see a corner of it you never saw before.