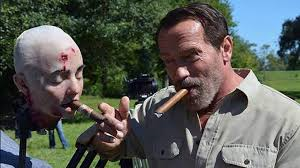 I know I have said it before, but I have always considered Arnold Schwarzenegger a self-parody more than anything. He is always doing high-concept material, he is always the chiseled action hero. But let's face it, he's never come off like a big-time actor. Schwarzenegger is one of those rare entertainers that is all about the presents and the panache of that presents, and not so much the acting. He is a big ball of charisma and cartoonish personality, and not really an actor. He never seems to really try, because why would he? He knows we all love him and we will follow him everywhere.

"Maggie" is uncharted territory for Schwarzenegger. The entire trailer shows our favorite action hero in incredible angst. It looks to me for the first time in a long time that Schwarzenegger is actually trying, actually delivering a powerful performance. I think that alone is reason enough to see "Maggie" when it comes rolling to theaters.

I hear people say all the time that they are fed up with zombie movies, and wondering when it will end. The thing is, zombies are hot right now, so the answer is that they won't go anywhere anytime soon. How these characters survive over the years is how they are handled by different artists. I love seeing different takes on a particular genre and a zombie movie is not only good if it features tons of death and gore. This looks like it is going to be a slow-burn sort of movie. No matter what, this looks to be a zombie movie unlike anything we have seen before. But maybe I am a little biased because I like the genre so much.

But Schwarzenegger though...this looks to be a once-in-a-lifetime role for him.

Check out the trailer, see for yourself.

Posted by Shawn Hoelscher at 7:34 PM