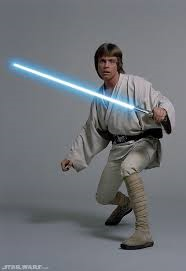 From: The "Star Wars" Franchise

Background: Once a lonely farm boy on a distant planet, Skywalker soon realized that he belongs to a forgotten order of peacekeepers known as the Jedi, all of whom were destroyed by the hands of the Galactic Empire. He trains to be Jedi, and restore order in a Galaxy living under tyranny for many years. He was also able to talk his father out of killing him and bring his dad back to the good side of The Force. Skywalker displays grand loyalty to his friends and continued to love his father even after he discovered that he was responsible for the purging of the Jedi. He was instrumental in the bringing down of the Galactic Empire.