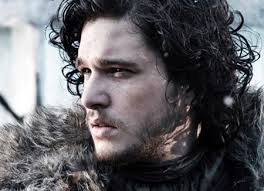 From: HBO's "Game of Thrones"

Background: Jon Snow is the bastard child of Ned Stark, the King of the North in the land of Westros. Jon Snow would eventually join a group known as the Night's Watch, a group of soldiers dedicated to protecting the entire land from whatever would threaten it. Snow graciously gives up family and love in order to protect the realm from whatever lies over the wall. He does so with fierce command and expert swordplay.