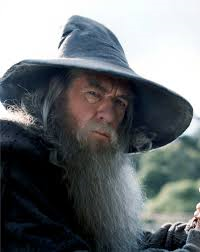 From: The "Lord of the Rings" franchise and "The Hobbit" franchise

Background: One of the most powerful beings in all of Middle Earth, Gandalf sets his friend Frodo Baggins on a quest in order to destroy the Ring of Power, before its dark lord creator can regain it. Before the quest to destroy the One Ring, Gandalf took Frodo's uncle on an adventure to help a company of dwarves retake their homeland from an evil dragon. Gandalf has shown graditude and compassion towards all free-folk of Middle Earth and always stands against the dark forces on the land. He is a being of immense magical power, he also proves that he is a good sword-fighter and can command huge ranks of soldiers with ease.