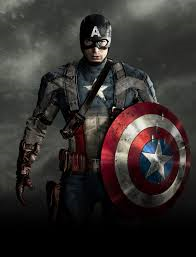 Background: Once a frail boy, fighting to enlist during World War II, Steve Rogers volunteers for the Super Soldier program, becoming the world's first superhero. During the 1940's, Rogers lead a small group of pro-Allies forces against HYDRA, an evil terrorist organization born out of Nazi Germany. Thought dead after his plane crashed after a fateful mission, Rogers body resurfaces sixty years later and defrosted. Rogers now lives in modern times and joined the superhero team The Avengers, protecting the world from threats, worldly and even cosmic. Captain America is the leader of The Avengers and also works for the peacekeeping organization S.H.I.E.L.D. Captain America is the embodiment of what all Americans strive for, and is arguably represents the moral compass of the entire Marvel Universe.