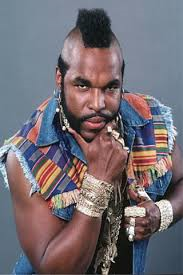 Background: Formally a sergeant in the United States Special Forces, Baracus went on the run with Templeton Peck, John "Hannibal" Smith, and "Howling Mad" Murdock after they were charged with a "crime they did not commit." The foursome took up employment as soldiers of fortune. Even though they lead lives as mercenaries, "The A-Team," as they would soon be called, the team always stood against evil and helped the oppressed. It can be said that Baracus was the muscle of the group, though he never got over his fear of flying.