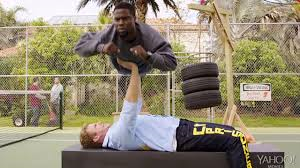 There is no mistake about it, I love Will Farrell. Yeah, he may seem familiar and he has a shameless routine that he sticks to in almost every film. But I have to admit that I have always relished in the chaos. I would never slam anybody for not liking him though, I think he fits a very particular mindset, he chases a very peculiar hilarity. But for me, liking Farrell came as early as 4th grade, when I started watching SNL religiously. Before that, I would watch it on occasion and I have vague memories of the Adam Sandler and Mike Myers and Phil Hartman days. But it was that late 1990's, early 2000's cast that really got me, and one of those people was Will Farrell.

"Get Hard" is already being met with an astounding amount of controversy. Just type in Get Hard Review into your Google or preferred browser and click on the first item that pops up. You'll be able to read pretty clearly where the vast majority of journalism voices stand on this movie. Personally, I think some of the controversy around "Get Hard" is a little outrageous, however, I did not love the movie. My problems lie more with execution rather than context.

Farrell plays James King, a millionaire living in Los Angeles who is loving life. He is about to marry a beautiful lady (Alison Brie) and he was just made a partner at his financial firm by his boss (Craig T. Nelson). What more could a millionaire ask for? I don't know, but I doubt one of those wishes would be to wind up in jail for securities fraud, but that is exactly what happens to King. On his last thirty days, King feels he must prepare for prison life, so he recruits Darnell Lewis (Kevin Hart) to help him. Darnell runs a small-time luxury car wash service and he is trying very hard to break into the business to provide for his family. King believes that since Darnell is black, he obviously been to prison. The thing is, Darnell isn't a passed felon but he will play along with King because King is prepared to give him thirty grand, and Darnell could really use the money to help build his business.

Now, I know what you are already thinking and I can bet that you understand right away how this movie is met with controversy. I don't know how many people will appreciate a storyline of a rich white man trying to get the help of a lower-class black man because he assumes he's been to prison. But right as the movie begins, we learn James King is a moronic bigot. I'm not saying that this is a "get-out-of-the-racism-argument-free-pass," I am just saying the movie doesn't not explain James King's reasoning. I am curious to see how audience react to the initial plotline. "Get Hard" has a concept that slightly stings, so if this idea for a story upsets you, I'd would say skip this entirely.

The real kicker and the reason of most of the controversy revolves around one particular scene at a gay bar. See, Darnell believes there is no hope for King and in helping to prepare for the worst, Darnell believes King should learn "to suck dick." He gets King to ask a man at the bar if he can give him oral sex, and in the bathroom King spends a good five minutes struggling with it. Now, just about every review you read anywhere is saying that this scene is homophobic. Let me say that I disagree, the scene is a play on fear. I think every man, gay or straight, fears prison because of the possibility of prison-rape. I can tell you with honesty that one big reason why I will never break the law is due to the idea of prison-rape, I don't like the idea of another man force sodomizing me and neither does James King. I just don't see how a straight guy not wanting to give another man oral sex is considered homophobic. The movie never once tries to say that being gay is wrong, its just saying a straight guy is way over his head and he doesn't know what to do about his situation. If there was a scene in a movie of a gay man being forced to give a woman oral sex, would that be considered straight-phobic? I just think in this particular scene, most critics missed the boat and are a little overly-sensitive about the material. I am not going to defend my position on gay rights, because I shouldn't have to. I don't like putting labels on people just as much as the other sane person, but this wasn't suppose to be an attack on gay-lifestyle.

The movie isn't bad because of its controversy, the biggest thing sin "Get Hard" commits is that it simply isn't funny. Will Farrell is Will Farrell in this movie, and while I found some humor in it, I don't think this will win over any of his dissenters. Even I know that Farrell really needs a passionate script in order for his usual routine to work and his character's jokes just did not land enough. What kept me watching was the wonderful work by Kevin Hart. Hart was born to be a performer and he has been surmising me all year so far, even if I haven't jumped for joy for all his films, his presence at least makes everything better.

As for the idea of an upper-class white guy and a lower-class black guy teaming-up against corporate America, well it was done much better in 1983. That was the year Eddie Murphy and Dan Aykroyd made "Trading Places. As I watched "Get Hard," I couldn't help but notice how much I liked "Trading Places" more and if I am thinking of one movie while watching another movie with a similar concept, that should say something. I think there is a fabulous "Trading Places"-esque film hidden somewhere in "Get Hard," but sadly that film never flourished.