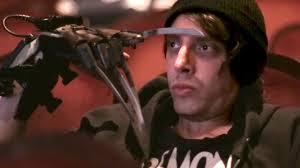 I have always prided myself on watching all types of movies. From the big budget blockbusters to the micro-budget indies that nobody has heard of. There is nothing that I will not try, and while I find it very fun, it can also be just as daunting.

"Buzzard" is a movie that is really hard to explain. I don't mind movies that are a day in the life of somebody, or movies that are not exactly linear. "Buzzard" is not a slice of life movie, it is as linear and chronological as those terms get. We follow the life of Marty (Joshua Burge) who is just kind of drifting through life. There seems to be no motivation for anything except video games, horror movies and confidence tricks. Yep, that is correct, Marty is a con artist who also happens to work at an unnamed bank. After swiping a handful of refund checks from his company, he goes into hiding in his friends basement in Detroit. For some reason, Marty begins to feel paranoid and equips his Ninendo Power Glove with Freddy Krueger-like blades and goes hunting.

Why he feels the need to go hunting? I am not quite sure. I think "Buzzard" tries to be a "Fight Club" of sorts as Marty feels stuck in a life unfulfilled, and he does something very crazy in order to feel alive again. Out of the two movies, "Fight Club" did the concept better. "Buzzard" moves at a snails pace, and I could hardly keep my eyes open for the conclusion. The movie has a twisted sense of humor and I'd be lying if I said I didn't laugh at all. But the laughs are far and in between, we watch helplessly as Marty sluggishly moves through his life and his inevitable strange outcome. The film's biggest problem is its pacing, the opening scene may have taken five minutes, but it easily feels like five hours. Never a good thing.

I think Joshua Burge does a decent job with his material, I just wish he had a character to play. Joshua spends lots of the film's running time starring off into space, looking confused by the world around him. Nothing he does to me adds up, there are moments of strange and moments of humor and I think Burge handles it all well, the rest of the movie is just too boring to really follow.

Its tough for me to really think of anything else to say about this film. The film feels like a big homage and it never really becomes its convictions. I have not seen a movie in really long time that had such bad pacing issues, it drags the movie down in a very big way. For a movie with no real sense of what it is, doesn't help either.