Who Played It Best? Robert Neville

WHO PLAYED IT BEST? ROBERT NEVILLE

A few weeks ago, we talked about this one. I also discussed the very long road it took to get the most recent version of "I Am Legend" to the big screen. "I Am Legend" is regarded by me for many reasons. First and foremost, Richard Matheson was the author who inspired Stephen King, MY favorite author. So anybody who helped get King's voice out there is an ace in my book. Second, even though this is a vampire movie (and even though some of the movies do not emphasize on this), "I Am Legend" gave birth to the modern zombie genre. Surviving in an apocalyptic world filled with monsters was a vastly unheard of idea until Matheson put pen to paper in the 1950's. I am not sure what the zombie landscape of storytelling would look like today if it wasn't for the work by Matheson. The book has been so popular that it got remade not once, not twice but three times. Vincent Price, the lord of horror films in the 1960's was the first to play Robert Neville (lead character) in "The Last Man On Earth" in 1964. He was followed by Charlton Heston in 1971 in "The Omega Man." Then in 2007, Will Smith played the part. My question tonight is who played it best?

My Two Cents
All three of these movies are interesting because the main focus of all of them is one actor. All three films did a very good job of adapting the idea of one person alone in the entire world and each performance by each of these wonderful actors is what drives the movies. I am no fan of Will Smith, mainly because of how arrogant he is in so many of his performances. I feel his ego spills into his movies and it makes it difficult to focus on anything else. With that being said, I believe Will Smith did the finest job for this particular character. He was able to ground his performance better because he did not have other actors to bounce off of (for the most part.) I feel like this also helped him emotionally to push the movie forward. As much as I am a Vincent Price fan, Price always had a knack for being the villains in these types of movies. I mean that voice alone makes it hard to believe that he is a hero trying to survive in a world gone mad. And Heston? Well, he does what he can with the role, but I felt "The Omega Man" was so over-acted and so over-the-top that it was hard to focus on much at all. For me, the competition dissolves down to Will Smith and Vincent Price, and while both actors do extraordinary work, I will give the edge to Smith.

Agree? Disagree? Fire off in the comment section or email me your votes. My email address is bloggershawn@gmail.com. You will have until next Wednesday to vote.

LAST WEEK: WHO PLAYED IT BEST? LISBETH SALANDER
Last week a foreign film went up against a domestic film. The results for Lisbeth Salander from "The Girl With The Dragon Tattoo" are in and here is how the vote shook out. 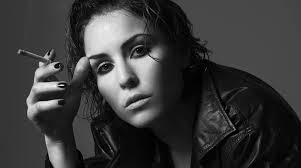