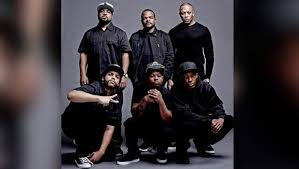 Okay, now I am excited for this. Completely.

When I wrote about this one back in January, I had lots of interest in it. I have been a huge fan of N.W.A. for awhile now, and I was curious to see a movie about them being told. At the same time I had some reservations. It seems biopic movies are mixed bag, it seems you can have so many great sources to make a movie about a real person, but somehow they still get screwed up. I can't stand movies that feel like Wikipedia pages, and for the most part, that is the Hollywood biopic movie. Telling from the first trailer, that doesn't seem to be the road "Straight Outta Compton" is going down.

There is a nice introduction made by both Ice Cube and Dr. Dre before the trailer begins. I hope these two are watching the production closely, because if they are, this film just might be a hit. It has all the potential. These guys revolutionized the rap scene. If you think rap music is all about money, killing police and using women, you're not listening closely. Just like any other form of music, rap is art. Yes, it is. Yes, it really is, stop arguing, it is. It takes a very particular skill set to be a good rapper and its not something anybody can do. These spoke their words, they said something that absolutely needed to be said, just because they didn't sugar coat something didn't mean it doesn't matter. Telling from the trailer, it seems the movie will focus on the struggle of turning rap music into art, and studying that just because a song has violent lyrics, doesn't mean that it doesn't matter. That could be a very cool platform for a movie.

I am really curious about this one now, how about you guys?

Posted by Shawn Hoelscher at 8:14 PM