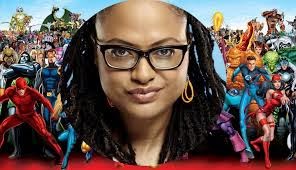 It comes to no surprise that Marvel has become a hot commodity really fast.

Several of Hollywood's big guns have said over the years that they want in on the Marvel Universe. Al Pacino, Jessica Chastain, Shailene Woodley and Kristen Stewart have all recently stated that they'd love to do a Marvel movie, even though half of those people I would never want within a block of a Marvel set (and I bet you can guess which half), I can understand all of the excitement. Hugh Jackman has stated repeatedly that he would love for Fox and Marvel to come to some sort of agreement to have the Avengers and X-Men crossover somehow, as did Andrew Garfield regarding Spiderman. Marvel is a very fun outlet right now, and it is a very good time to be fan of Marvel right now. (And it seems DC is well on its way as well...)

Ava DuVernay made a huge statement last year with "Selma." I have reflected  a lot on the movie since I saw, and I still find myself shaking from it. "Selma" truly is a great movie, through and through and I hope DuVernay gets some sort of recognition at the Oscars in a couple weeks. So the big question now is, what is in store for DuVernay's future?

She mentioned she'd be open to directing a Marvel film. Here is a quote from Joblo.com today:

"I'm not a big comic book fan, but I know that I love to deconstruct heroes, deconstruct myths. I probably would want to do some kind of origin story, where you get to the core of it, before they get the powers. I don't know about Marvel, but I know I love to tell all kinds of stories, so I don't say no to anything; everything's possible.
Read more at http://www.joblo.com/movie-news/selma-director-ava-duvernay-says-shes-down-for-directing-a-marvel-movie-191#YUm8jmQskfhC21M0.99"

I am glad that Marvel wants as much wonderful talent behind the camera as they do in front, but determined by what I have been reading on the web, I hope they give DuVernay something good to work with. I am already reading that DuVernay is a perfect match to direct either "Captain Marvel," a female superhero movie or "Black Panther," an black superhero movie. While I can understand why someone would offer up those options, I feel the worst thing Marvel could do to a director is bill them for something stereotypically. Why should DuVernay direct "Captain Marvel" simply because she's a woman, or why is DuVernay only fitted to "Black Panther" because she too is black? If you put a filmmaker into a box because of stereotypes or close connections, the film runs the risk of feeling phony. I believe it would come off more as a publicity stunt to hire her for one of those films rather than making a calculated decision.

Personally, I would love for  DuVernay to make "The Inhumans." It would probably be an origin story, just like she wants and just imagining her talents in "Selma" and matching them to the weird world of the Inhumans would have our curiosity in overdrive, but I don't want her directing "Captain Marvel" just because she's a woman, if she does sit in the directors chair for either "Captain Marvel" or "Black Panther" I hope its for a better reason than an easy fit.

This is all speculation right now, but I can't wait to see if anything comes of it.

Posted by Shawn Hoelscher at 8:41 PM