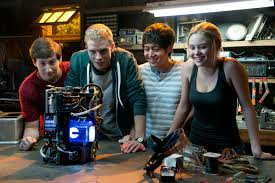 I like time travel movies. They can be great fun in the hands of the right people. They can be mysterious and lead to some unforeseen pay-offs. They can be adventurous and take on unbelievable journeys. I have found over the years that if you don't much care for the characters in these time travel flicks, and if the characters can't help you buy into the premise, it is going to be a hard sit-through. I think Michael J. Fox did a great job getting the audience to buy into the adventures of Marty McFly for three whole movies, and even earlier this year with "Predestination," Ethan Hawke allowed us to buy into this world of agents going back in time to stop terrible events from occurring. There is a fragility to the fabric of time that can parallel the characters of the story, and that can be great in the right hands.

On the other hand, the found footage device is beginning to wear thin. It is something I can't get myself excited for these days. Rather, I just roll my eyes and keep reading about something else. I cringe at every knew found footage movie, wishing this lavish trend would go away for good. It was cool in the beginning, but with so much, Hollywood has sucked the life and wonder out of the device. I can't honestly say that "Project Almanac" uses the device to a good affect. While it is a little refreshing that this isn't another horror movie, "Project Almanac" doesn't use the device in any bold or revitalizing way. This movie is basically a gimmick from minute one, and that makes for a hard sit-through.

We meet David (Jonny Weston) who was recently accepted into MIT, sadly he can't go because he does not have the money to attend. He needs to find something, come up with something so outstanding that the college will give him a scholarship. David, along with a small cohort of peers, begin looking through his dad's old stuff and find mysterious blueprints. With these blueprints, David and his friends invent a time machine. While it takes sometime getting used to, David and his friends can successfully travel through time.

What do they do with this new device, might I ask? What any high school-age person would do, act crazy, stupid and wild. For an over-abundant amount of running time, we watch David and his friends do a lot of really dumb stuff just because they can. While its a fun daydream to imagine being able to go back in time and do whatever you want, not caring about getting caught. But the movie never takes the time to develop its characters that's its hard to root for them. I would list the other actors in the movie that make up David's clique, but honestly, what would the point be? Its your typical stock found footage actors, kids you've never heard of and will likely never see again. While the found footage device is devious for casting unknowns for the sole sake of making the movie come off "real," none of these guys can act, so its hard to really follow them through this story.

Once things start getting really bad for the characters, it is then hard to feel bad for them. Had the children used the time travel device for something worthwhile or something adventurous, I would probably feel bad for them. When Marty McFly went to the future, he was trying to save his family, and at the same time save himself. When Kyle Reese went back in time, it was to protect the woman who give birth to the master commander who would rid the world of the machines. When Gil goes back in time and experiences Paris through several eras, he initially wants to stay, but then he would have never been inspired by the works he read and so he learns a valuable life lesson. There is no world to save in "Project Almanac." There is no fable moral or life lesson presented in "Project Almanac." We follow these unlikable characters through this story because they have to right their screw-ups, which turns out to be not exciting at all.

The found footage device doesn't even work that well for this movie because there are moments I really wanted to see, that one really can't fake with found footage. The great horror films within this device, the "Paranormal Activities" and "Blair Witch Projects" all knew when and when not to shoot a certain scene. I would go as far to say that "Project X," does a much superior job with the format. The camera in "Project Almanac" feels like it was held by schizophrenic, which makes the experience dour.

I have been in the corner of this type of movie while many bailed. I have returned, time and after time to see if anybody can do anything new, fresh, or innovative with the device. As of right now, that seems like a very shrill possibility and that breaks my heart.