My Reaction to the 2015 Academy Awards 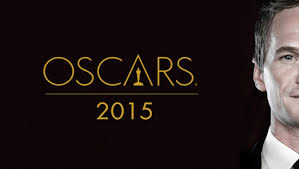 Last year, I created Oscar predictions for the Academy Awards and out of the twenty-four categories listed, I guessed twenty right. I hoped to do better this year than I did last year, but sadly that was not the case. I had a sinking suspicion that I would do worse this year, but I ended up breaking even. I thought for sure, I could go for the perfect ballot this year, but I ended up getting twenty correct predictions out of the twenty-four categories of the Academy Awards. Still, its not bad at all, and I guess I am going to keep working toward a perfect ballot, just not this year.

My predictions are all part of the point. I don't put much stock into the Oscars, and just in case I didn't say this last year, I don't need the Academy telling me what the best of this or the best of that was. While I was a little steamed that Michael Keaton did not get the recognition I believed he deserved, nor Rosamund Pike, nor Richard Linklater, nor "Dawn of the Planet of the Apes" or the dozen other movies and actors I was rooting for didn't win. I already have a pretty good indicator of what I do and do not like, and since most of my favorites were awarded a LEGO Oscar statue, I am still feeling pretty good about last night's ceremony.

I do have to admit one thing. I was pretty excited for Neil Patrick Harris to host this year. I thought this year, and the two years before it, ABC had chosen some great hosts. I loved how left-field a choice Seth MacFarland was, and even if he seriously never does host again, I am just glad it happened and that I witnessed it. I love that there was a slight raunchiness to his hosting. Last year, I thought Ellen DeGeneres totally killed it last year, just killed it and I thought she produced one of my favorite ceremonies in a very long time. I was hoping the same for Neil Patrick Harris. I thought some of his jokes stuck. The Benedict Cumberbatch-Ben Affleck-John Travolta joke? Good one. Harris' reference to Farmer's Insurance after J.K. Simmons' win? Didn't catch it the first time. I also liked his "Birdman" bit, simply because I loved that movie so much. The rest of his act? Not as exciting as I would have hoped. Especially around the middle-half of the ceremony, Harris seemed to really drag his performance out, and lots of his material didn't land with me. His whole predictions joke was overdrawn and it didn't land the punch line and it dragged an already long ceremony. I found that to be a little disappointing to discover how bland he was overall as a host.

The things that made me happy
Once Alejandro G. Inarritu was called to the stage for Best Director, I knew "Birdman" had Best Picture in the bag. I knew this was going to be a year when director and picture were in perfect alignment. I think Inarritu deserves all the hype and praise that has been mounted on top of him. I give anybody credit who can say "balls" and "prick" on national television and make it come off endearing. While I was a little surprised that the movie also beat "The Grand Budapest Hotel" for Original Screenplay, I think "The Grand Budapest Hotel" deserved all the technical awards it got last night. That movie was the best movie to get lost in last year, and the bright colors and crude scenery made the experience better, and I can't wait to get the movie on blu-ray and experience it again. While I was kind of sad that "Life Itself" didn't get a Best Documentary nod, I am incredibly happy that "CitizenFour" got the win. I am glad I got to catch that right before the ceremony, and it was a real eye-opener. I was dreading Lady Gaga's performance of "The Sound of Music," but once she began, I was surprised how much she didn't suck.

I was not surprised that Eddie Redmayne or Julianne Moore got wins yesterday, but I feel that represents a certain bias the Academy carries. Sure, Redmayne and Moore did good work in their films and deserved nominations, but I think Redmayne starring in an ALS movie and Moore starring in a Alzheimer's movie helped their odds. The Academy loves voting for movies about social issues (take a look at last years ceremony for more examples.) My problem is I wish they would leave their biases at the door before voting. The same can be said about "Selma's" win for Original Song, and out of each song highlight in that category, "Glory" ran the longest and had the most thought-out choreography. That is one part of how it is easier to predict how the Academy will vote, but it also takes the fun out of the ceremony at the same time. I feel Michael Keaton REALLY deserved to win, much like Mickey Rourke in 2009, that was a once-in-a-lifetime moment for Keaton. But it got squandered because his movie came out the same year as an ALS movie. Seems unfair.

I also didn't find it surprising that J.K Simmons and Patricia Arquette won for supporting performances. I am glad they both won, but Patricia's speech rang a little odd to me.

The surprises
The live performance of "Everything is Awesome" was a shocking, bombastic ball of crazy. But you know what? I loved every possible moment of it. I love that the Academy allowed for a little craziness into the ceremony. I was also shell-shocked by the win for "Big Hero 6," and I beginning to wonder if Disney holds lots of sway (or any) with Oscar voters, they seem to be off and running each year in the Animated category, and two Disney-produced movies won in both Animated categories. My dog was sure happy that "Feast" won animated short though!

By and large, not a surprising ceremony last night for most categories. I hope next year they find somebody who is consistently funny as a host. Much of the last half of last night was flat to me and I hope the Academy can find someone who can keep the momentum going. But I will say this of Harris, at least he was not as bad as that Anne Hathaway/James Franco debacle a few years back...yeesh.