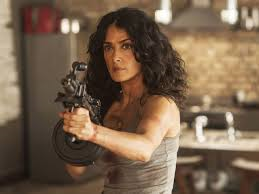 Salma Hayek has always been a good-looking actress, but she has never been somebody I have liked as an actor. I feel like nobody has ever given her good material except maybe Robert Rodriguez, and even then, she was more background than anything. I don't really think she has ever done anything really worth merit. So I really don't know what was going through my mind when I rented "Everly" on Xbox video last night.

I have to say that if there is one movie that I'd love to see adapted to stage play, it would be "Everly." I say this knowing it could actually work well. The entire movie takes place in one location, an apartment room. The general gist is Hayek plays Everly, a woman who was forced into prostitution by a powerful crime lord. One night, she decides she wants a normal life, which angers the crime lord. He sends every assassin over to place to take her out, and she survives onslaught after colorful onslaught. That is basically the movie. This is not a movie that will send Salma Hayek to any awards circuit. This is not a movie with a rich screenplay and a thought provoking plot. For fans of the shoot-em-up genre, this should suit you nicely. Also, anybody who are fans of the typical Tarantino-riff, this should suit you nicely too. There is enough style packed in this movie to make even his worst dissenters happy.

I will say that this isn't a big, brilliant showcase for Hayek. Don't get me wrong, she throws her heart into this one, big time. I also have to respect something that has a rich, female lead, something that is desperately missing from movies in general. But in my eyes, Hayek's character is all style and no substance. She is a type and not really a human being in this movie. All her character does is exactly what characters in these kinds of movies do, down to the last detail. I found some of her humor funny and I liked some of her action scenes, but she's a non-character from minute one. This is a role anybody of any talent level could make halfway decent, so why make a big deal out of it?

I will say that Hairoyuki Watanabe's crime lord was fun at the very end, and I wished his character had a greater presence in the movie, not the evil voice we hear through the cellphone until the very end of the movie, when all of  his minions run out. I also found Togo Igawa's sadist character disturbingly great, but his scenes were so creepy I felt like I was watching a different movie completely. Overall, there sadly isn't too much to say about this one, and might be the worst thing I can say about it. I like it when actors who have been out of the loop try to break back in, but when your ice-breaker is something that feels too familiar, how can you break back in?