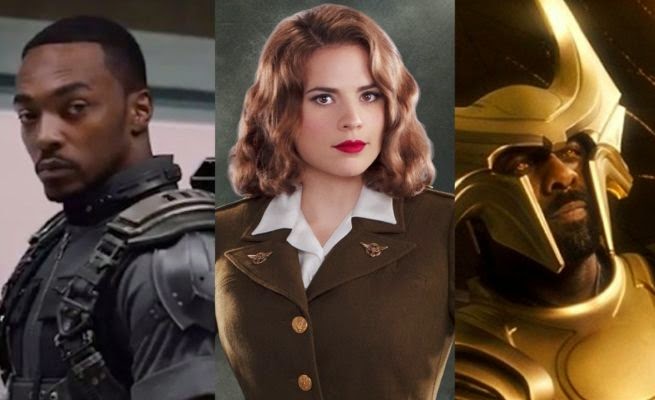 There are always rumors circling movies, certain possibilities that will either come to light or come to nothing. You can never know what to trust until a studio comes forth and confirms it, especially for these big budget blockbusters. Which makes nights like tonight so special.

Anthony Mackie played Same Wilson aka The Falcon in "Captain America: The Winter Soldier." We have heard vague rumors for awhile that Mackie would appear in the post-credits scene involving Captain America creating a new team of Avengers. Is this claim true? Will Captain America be creating a new team of Avengers by the end of this movie, to lead into the Civil War? The official poster for "Age of Ultron" was released  today and features Mackie's name. Would they really put his name on a poster for a post-credit scene? They never have before, so why start now? I wonder if Mackie will have somewhat of a significant role in this sequel since his name is on the poster.

Hayley Atwell's name is on the poster as well, who is famous for playing Peggy Carter in the Captain America movies as well as the ABC show. We got a small glimpse from the "Age of Ultron" trailer in October of Captain America walking in his modern costume through what looks like 1940. I just recently read the comic version of "Age of Ultron" and trust me the comic version will have grave differences compared to the final film. But something that has been rumored as of late, which was featured in the comic book, is the idea of time travel. Will the Avengers travel through time? Or since we know Wanda Maximoff is joining the story, will she give the captain one wild vision? We shall see.

We have known for awhile now that Thor would be heading back to Asgard for "something" and that "Thor: Ragnarok" will take place directly after "Avengers: Age of Ultron." So featuring another Asgardian in this movie isn't that farfetched. I just wonder again how big of a role Elba will have in this sequel. Will he just appear to help Thor get back to Asgard? Or will he have something more pivotal to play?

The news today has given made me brainstorm some intriguing theories. Now, more than I ever thought I could be, I am ready for "Avengers: Age of Ultron. We are only about three months away now, and it feels good!

Posted by Shawn Hoelscher at 7:48 PM