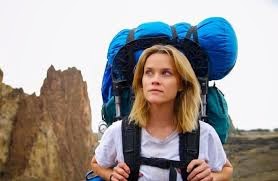 The 2014 Award Circuit will be a collection of reviews of films that are in some kind of award runnings within the months of January through March. Not only will this prepare me for the big night (AKA Oscar Night), but it will also allow me to catch up with some of the critically acclaimed films I missed out on in 2014. I hope you enjoy reading them as much as I enjoy watching and writing them.
I think as human beings, we push ourselves. We try to discover our best possible potential. That seems to be different for everybody. We have different goals, different fears, different lives with different upbringings. Sometimes there is some kind of event that opens an entire world for us, and we are able to do things we never knew we could. I never thought I'd ever write a personal blog, it was an idea that never entered my mind for all the years I have loved movies. I always loved to write, and I always loved movies, but both ideas never clashed. Then when Roger Ebert died, something awoke inside me, some kind of calling that now was the time to get serious about letting my voice be heard, no matter how small a group listens back. If this blog was only for two people, then I would have felt satisfied.

Cheryl Strayed was a woman who hiked the Pacific Crest Trail, which spans from Mexico to Canada in 1995. She decides to do this for several reasons. The death of her mother, Bobbi (Laura Dern) had a long-lasting effect on her. An effect that snowballed into her unsuccessful marriage to Paul (Thomas Sadoski). The terrible divorce then snowballed further into a wasteland of drugs and sex. She needed that outlet, that light at the end of the tunnel, some kind of dramatic salvation. She found it hiking through some of the last untouched land in all of the America's. What follows is an extraordinary tale of finding your potential.

The film is told through an unchronological format. We begin the film watching Reese Witherspoon pull out one of her toenails, apparently after some rather nasty hiking, and that leads us right to the beginning of the hike for Reese's character Cheryl. She seems a little wary of the trip, but deep down she knows she needs it. What was most interesting about the movie was its somewhat dreamlike quality. We experience Cheryl's memories through drifting moments and quick cuts. Do you guys experience memories as quick reminders of your past? I felt "Wild" really captured that. I was also interested how the movie played with expectations. There are several moments when Cheryl relies on hitchhiking and the help of strangers to make it through her hike. Right when you think something is going to happen to Cheryl, it turns out being okay. I thought that was interesting.

Do I think Reese Witherspoon deserved the Oscar nomination? Umm, yeah, I guess, kind of. What shocked me the most about "Wild" is how plastic and ordinary Witherspoon's work was in the film. There are never moments that were particularly exciting, and I am not sure she ever really came into her own. After seeing several actresses de-glamorize themselves, seeing them take on hard, difficult work, I was amazed how much Reese Witherspoon looked like herself here. She is suppose to be playing someone unafraid of getting hurt and she looks like she doesn't like to get hurt the whole film. Witherspoon's work isn't bad, its just not what I expected and bit on the disappointing side.

The movie really finds its second life through the work of Laura Dern. Her work as Cheryl's mother is what really carries the emotional weight of the movie. I have a feeling that if Laura Dern played Cheryl Strayed, it would have been a much more beneficial experience. She sells every bit of her backstory, she makes sure we feel every bit of her emotions and she really becomes her character. I have liked Laura Dern's work in the past, but she is still very good at what she does and she cements herself as one of the most talented actresses of her generation.

I have also been a long-time fan of the band Everclear. So I got a little grin when I saw that the lead singer, Art Alexakis shows up in a small cameo here. Good stuff.

There is lots to like about "Wild," but I feel it could have easily benefitted from a better picked lead. I think Witherspoon proved here that she is ready to become a titillating, important, relevant actress, but she might be a little too girly to take on roles like this. None of the emotions she was set to play came through for me, and it seemed the rest of the movie felt right on the money. If she shocks the Dolby theater tomorrow with a win, I will be shocked.