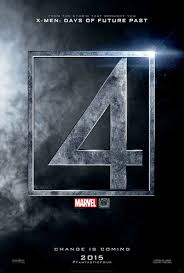 It's been awhile since me and my buddy Hunter have collaborated on something on this blog. I apologize for that. I try hard to keep things different and relevant on this blog, and I enjoy having more than one voice for the discussion of movies. But for the first time in several months, Hunter and I are going to be talking flicks together again. Tonight, we will discuss the "Fantastic Four" teaser trailer that hit the internet today.
﻿
I have been on the fence about this new "Fantastic Four" movie. Yes, I love Josh Trank as a director and "Chronicle" was one of those little-seen hits that snuck up on me and blew my mind completely. It seemed to me that Trank was almost the perfect fit for "Fantastic Four" in my eyes afterward. Then rumors galore began to circle the film and after casting was released, my excitement for the film slightly halted. I just don't know if I can buy Miles Teller as Reed Richards or Michael B. Jordan as Human Torch or Jaime Bell as The Thing or Kate Mara as Invisible Woman. It seems like picking a young cast for the sake of contracts and casting, over any sort of artistic meaning. The Fantastic Four really aren't meant to be kids, and that worried me deeply.

Now today, the first teaser for the movie was released and it wasn't at all what I expected. This really doesn't look like a superhero movie, but honestly, I don't mean as something negative. I've been reading that people are comparing the teaser to a Terrance Malik film or "Interstellar" or "Super 8" and I totally get why people are saying that. It seems this "Fantastic Four" movie will be more about discovery and finding one's potential over the big spectacle. Considering these are the Fantastic Four, I am not sure that is a bad way to move forward. These characters are scientists to making the film more science fiction oriented is smart. If this ends up being a science fiction film that happens to feature superheroes, that may just work. It'll be different compared to what the MCU is doing, and it would further cement the audience forgetting the horrible franchise that happened ten years ago.

I will say that even though this is a teaser, the tone of the film is very dark. I understand the angst in a Batman movie, but that doesn't mean it fits every superhero movie. I don't want this film to be somber and sad just because that is what sells at this point in time. What makes Fantastic Four special is that the tone is fun and the story revolves around a family. Why make it dark because Nolan's "Batman" movies made lots of money? Copying that aesthetic to the recent Spider-Man franchise didn't help and I am not sure it really worked for "Man of Steel." But, I do have to remember that this is a "teaser" and perhaps they didn't add the more humorous side of the movie.

Overall, I am intrigued and curious by what I saw. I was not expecting to be so captivated by this film's teaser so that should count for something. I just hope the teaser's dark tone is just for the teaser and not the movie. If this ends up being a science fiction/superhero film with the fun of the MCU, then this will end up being an awesome "Fantastic Four" movie.


"Fantastic Four has had 3 abysmal live action adaptations since the characters were brought to life by Stan Lee and Jack Kirby in the 1960's. To date the newest incarnation of the beloved comic book franchise has been plagued by setbacks on set. Rumors surrounding the production of director Josh Trank's (Chronicle) adaptation of the origin story have not been good. From various rewrites of the script, to rumors surrounding Trank himself not showing up to work on set, morale for the movie has not been high. Alas today we saw the VERY FIRST footage of Fox's Fantastic Four reboot, and let me tell you it looks... Well it actually doesn't look half bad. Look, as far as teaser trailers go this trailer is a TEASE! There is next to no plot revealed in the trailer, other than what geeks like myself already know. What we know (or think we know) is that much like The Amazing Spiderman this movie is going to rely heavily upon the Ultimate Fantastic Four plot threads which shows a young Reed Richard (Miles Teller, Whiplash) and his friends Johnny Storm (Michael B Jordan, Chronicle) Ben Grimm (Jamie Bell, Jumper) and Sue Storm (Kate Mara, House of Cards) all getting their powers from being teleported to the negative zone. Look for all I know this movie could turn out to be a massive pile of shit, much like the last films were. But this is all I'm saying, you would have to try HARD to make a movie worse than Rise of the Silver Surfer. Ponder that. Better yet do yourself a favor and watch the trailer for Fantastic Four. Chances are you might think it looks kinda alright too."
What did you all think of the teaser? Here it is below:
﻿
Posted by Shawn Hoelscher at 7:46 PM