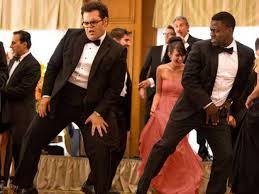 I have talked to several people who have been married and they have always discussed how stressful the planning of a wedding can be. I bet its even more stressful when you don't have a single person to add to your wedding party. Thankfully, I've never known anybody with that problem but I don't doubt they exist. "The Wedding Ringer" reminded me a lot like "I Love You, Man," but with a much zanier premise.

I like Kevin Hart quite a bit. I think he's a charming and funny actor. I think he brings a lot of energy to the bring screen, no matter if his role is big or small. Yet, it never seems he has had a role that could fit into his style well. I walked into "The Wedding Ringer" a little nervous, just because I didn't want it to be another easy in for Hart and I didn't want to see a altered version of "I Love You, Man." With that said, I thought "The Wedding Ringer" was much better than I thought it was going to be, and I was surprised by nearly every minute of it.

I should probably also say that "The Wedding Ringer" is kind of like "Hitch" too. Kevin Hart plays Jimmy Callahan, who is the leader of Best Man Inc. A company that provides a best man and groomsmen for a man who does not have any friends. Business is booming for Callahan until he meets Doug Harris (Josh Gad) a loner who will be marrying the girl of his dreams (Kaley Cuoco-Sweeting) in two weeks. Already pressed for time, Harris asks Callahan to perform a Golden Tux, the most elaborate, most complex cover for a wedding party, so difficult that Callahan has never tried it, never even tried to offer it on his brochure of packages. It's nearly impossible to come up with seven groomsmen in two weeks and have them assemble themselves as Harris' buddies, but once Callahan sees Harris' determination, he can't say no.
The work by Gad and Hart is confident, funny and even deep at times. As I am familiar with Hart, I was not so much with Gad. But the best thing I can say about him is that I definitely want to see more of him in the future. A role which could have easily been handed to greats like Jonah Hill or Seth Rogen works in a much different way that Gad. Gad doesn't produce the typical loser in the need of a hand, he creates a person we can identify with, even in the smallest of terms. I have never liked Kaley Cuoco-Sweeting in the past, and I have never once been a fan of "The Big Bang Theory" at all. But I feel that even though I find her annoying, she does a good job and completes exactly what she was asked to do.
Underneath the craziness of the film, the soul purpose of "The Wedding Ringer" is to remind the audience of the beauty of friendship. It also states that even those who spend their entire lives helping others need to be happy at the end of the day to, otherwise what are you waking up for? Yes, there are moments when "The Wedding Ringer" get a little to plastic. Yes, there are moments when "The Wedding Ringer" feels like every other romantic comedy, no matter how raunchy some of the jokes are. Its that purpose of friendship that finally won me over. Yes, there is some predictability in this movie, but not as much as one would expect. In fact, the thing that shocked me the most was how interesting the premise stayed throughout the whole movie. Even as it held up clichés and plot-lines we have seen a million times before.
Movies this fun and this endearing don't get released this early in January. I hope that this is an omen that 2015 is going to be year unlike any other. "The Wedding Ringer" isn't the most perfect thing playing at the theater currently, but for a movie to be this entertaining in a month that is stereotypically crammed with crap, I'll take this pleasantly.
FINAL GRADE: B
﻿
Posted by Shawn Hoelscher at 8:31 PM