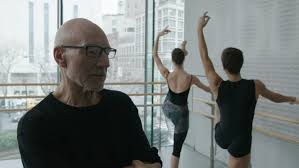 When I sat down to watch "Match," I knew very little about it. I knew Patrick Stewart, Matthew Lillard, and Carla Gugino in it, all three actors I really like. I had no idea it was based off of a play, and I did not know anything about it prior. Sometimes, it can be a rewarding exercise to go into a movie cold turkey. But perhaps I am just saying that because I am a cinephile.

Patrick Stewart plays Tobi Powell, an ex-dancer who has retired to teaching dance at the Juilliard dance school in New York City. We don't spend a lot of time focusing on his Juilliard presence, as the film really kicks into gear. It is pretty clear upfront that this is a movie based on a play, just by telling how the angles and sets are set up. With that said, I like the way the film is staged. There is an almost surreal nature to the film when they try to match it to a stage aesthetic. I think the shots in the film are well done.

Tobi Powell meets with a couple played by Carla Gugino and Matthew Lillard. The couple is writing an article on dissertation on the dance community from the 1960's. Before Tobi fell into work as a dancing instructor, he was a popular dancer, and he seems like a perfect candidate to interview for such a dissertation. What Tobi soon starts to realize is that the questions start to become more and more personal and this begins to make Tobi feel very uncomfortable. I don't want to give away what it is that Lisa (Gugino) and Mike (Lillard) are after but it is not a dissertation. I will promise that this does not turn into a weird horror film or anything completely zany. This is a character piece, through and through and it is guided by a terrific trio of actors who all bring their A-games.

Walking into this movie, I had a pretty good idea that Patrick Stewart wasn't going to be anything less than amazing. This is the guy that lead the charge on "Star Trek: The Next Generation," which were my personal first memories of "Star Trek." I always thought that as Robert Downey Jr. was born to play Iron Man, I equally feel that Patrick Stewart was born to play Charles Xavier and every X-Men appearance he makes is vastly worthwhile. This is an actor who has had a great career, and he can add this little gem to his repertoire. We as an audience, have never seen Patrick Stewart play a character quite like this before, and he does a very strong work here. I love how he bursting with uncanny energy at the start of the film, and as the drama catches up with him, we feel the affects the story has on him. Its a great character piece for him and is easily the highlight of the movie.

I also liked the work by both Carla Gugino and Matthew Lillard. I think Matthew Lillard in particular sticks out in this, also because we rarely see work like this from him. Lillard made a career out of being the crazy friend in teen comedies of the 1990s and early 2000's. Now all grown up, it seems his talents have matured a bit. He has the least amount of screen time in the movie compared to the other two actors, but he makes every moment count, he makes sure we feel everything we are supposed to. Even Gugino who has made a career doing sexier, grittier movies takes a turn as someone who is inquisitive on helping her husband. I was blown away by what was accomplished.

I feel like the story gets a little off track near the end, trying really hard to make it to that hour-and-a-half mark. I also feel the quick transition of messages the movie wanted to convey at the end seemed like a weird choice. But overall, this is a grand showcase of acting by three actors who have stepped out of their comfort zones, and in a slower month, that isn't terrible.