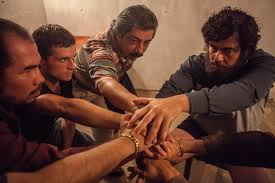 I have no clue if the events depicted in this movie are true or not. The movie never states, nor did I see, a title-card claiming that "Escobar: Paradise Lost" was based on a true story. I have never really taken any time to study Pablo Escobar. I know he was a very prominent drug lord during the 1970's and 1980's. I know his base of operations was in the country of Colombia. He is hailed as the wealthiest drug lord to ever live as he made a net worth of $30 billion by the 1990s. Like many criminals, he had a Robin Hood image that he maintained, which was a merely a myth.

"Escobar: Paradise Lost" really isn't about Pablo Escobar. It is about a Canadian named Nick Brady (Josh Hutcherson) who comes to Colombia to open a surf camp with his older brother Dylan (Brady Corbet). Eventually Nick meets Maria (Claudia Traisac) a girl he quickly falls for. Nick soon learns that Maria's uncle is none other than Pablo Escobar (Benicio del Toro) and Nick soon falls into the temptation of working in the drug trade, something that has harsh consequences on him and Maria who eventually becomes his wife.

I want to say upfront that both Hutcherson and del Toro do good work in this movie. I am continually impressed by the work Hutcherson delivers seemingly every year. I love him in "Hunger Games" no matter which movie in the series it is. I think he was pretty much the best part of that horrible "Red Dawn" remake that came out in 2012. I think "Detention" is the most criminally under-seen film of the last five or so years, and Hutcherson really does good work in it. Once again, Hutcherson is good in this. We feel every moment of excitement when he first lands in Colombia, we feel every moment of him falling for Maria and we feel every moment when he realizes he is way over his head. Its good work and Hutcherson really carries this movie almost single-handedly.

Like I said, del Toro is good, but that is about where it ends. We see del Toro play these kinds of roles before. We knew del Toro would make an excellent Pablo Escobar. The problem here is that it seems he is just going through the motions. He was never given an actual character to play, as written this Escobar is just a sinister figure who seems more presence than feeling like a powerful drug lord. All del Toro's character adds up to is intimidating sneers and looks, by halfway through the movie I couldn't tell if I was watching "Escobar: Paradise Lost" or "Savages," the character del Toro plays is the same in each of those films. I also found it creatively odd that del Toro spends the whole movie looking like a Muslim terrorist. Sure, Escobar wasn't a good looking guy by any means, but he had a certain iconic look to him and Muslim terrorist was not it.

I thought Claudia Traisac was a discovery in this movie. She is a beautiful girl and she sells her character to the best of her ability. But much like with Benicio del Toro, Traisac is never given much of a character to play. She is not much of a character at all, she is merely a device that leads Nick to Escobar. Its too bad because I feel there was some storytelling tension and certain situations that would have benefited the movie, but those decisions were totally missed out on. It's too bad because I truly feel that if Traisac was given a real character to play, she could have done well with it.

As for the movie itself? I hate to say that compared to all the other crime movies involving drug lords, its not much of a movie at all. The motivations of Nick's decisions are very poorly explored, feeling more like several random scenes than an actual movie. What makes Escobar tick and how he possesses so much power was also poorly explored. There is very little development with the characters, there is very little logic to what is happening between the characters and there is very little reason to why we as the audience should care. But hey, Josh Hutcherson is really good in it, and he keeps things moving nicely. It just seems odd that he is trying so hard for something that barely registers as a movie.