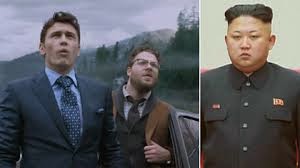 I just realized that due to being so busy with holiday stuff and trying to cram as many new 2014 movies before the year ends, I never weighed in on the Sony debate.

When I heard that Sony was going to pull "The Interview" from theaters across our nation, I was pretty peeved about it. Not only because I thought I wasn't going to lay eyes on something I've wanted to see for several months, but because we were allowing some tyrant miles and miles away to decide how we far our freedom of speech goes, and just how far are freedom of expression would go in this country. The idea that someone so far away can dictate how we as a country expresses ourselves artistically is completely shameless. This isn't the first time a movie like this has ever been made. Who remembers "Team America: World Police" ten years ago? Who remembers "South Park: Bigger, Longer and Uncut" or "Hot Shots: Part Deuce" from the 1990's which made Saddam Hussein look like a ridiculous buffoon? Not to mention that a mockumentary was made in Great Britain in 2006 detailing the assassination of George W. Bush. Satire on current politics is nothing new in the world of movies, and bending to the will of a dictator seemed sad. Though, I do realize that no matter what, it was a tough decision for Sony. Something very serious could have came from all of this, and that blood would have fallen squarely in Sony's hands. But, does that mean we have to allow someone to control us through fear?

I have been debating about this one for weeks now. In the end, I figured Sony would find some kind of outlet to present their movie. When I heard that Sony would release "The Interview" on several venues, including Xbox Video and YouTube. But what made me even more overjoyed with happiness was that some theaters allowed the film to show. One thing we would have lost if home viewing was the only option is the wonderful sound of unified laughter. Movies unite us, in more ways than we realize when we are sitting in the dark, and had we lost that to an extant...it would have killed me.

I am also glad I got to witness "The Interview" because it is a batshit-insane, wild ride of a comedy.

We already know the story now. James Franco and Seth Rogen play David Skylark and Aaron Rappaport, both of whom run a successful talk show in America. By a strange will of events, David gets an interview with Kim Jong-Un (Randall Park) in North Korea. Just as David and Aaron are ready to set off into the communist state, they are assigned by the CIA to assassinate the North Korean leader. From there, shit goes down. With a premise like that, I knew I was in for a crazy ride, I just didn't know how off-the-rails, Rogen and his co-writer Evan Goldberg were going to go.

I love that this is a film that dabbles in the raunchiest of jokes, the most zany of jokes and even the most offbeat of jokes. This is a movie so rich with laughter that I could hardly believe what I was seeing. There are also some fun action scenes, that are very much in the style of Goldberg and Rogen movies. "The Interview" has everything, anybody would want in a comedy and I love that this cast and crew didn't hold anything back at all.

We already knew over the years that Rogen and Franco can carry a movie with genuine ease. They make it all look effortless once again. Rogen is playing his yelling, crazy self again, but much more restrained, which I like. The real goldmine in this movie is the work done by Randall Park. I don't see how anybody walking away from this movie can't see Randall Park as the highlight of the movie. He creates such a funny portrayal, such a strange portrayal of Kim Jong-Un that its hard not to be drawn by it, captured in the weird fascination of it. Randall Park has some of the funniest material in the entire movie, and he really nails it all. He also has the most difficult part to play in the whole movie, and I loved how well he handled all of his characters transitions in the movie. This is a guy who relished every moment he was onscreen, and the audience is richer for it. In order for this movie to work, they needed to find the perfect actor to play this dictator, and boy I think they nailed it.

If you haven't had the chance to see this yet, you need to has fast as you can. This is what outstanding political satire in our modern world looks like. But at the end of the day, I love what this movie boils down to is just how great a true friendship can be, and the importance of holding onto those friendships. Especially in the face of great danger. If the trailers for this movie made you raise an eyebrow, then you owe it to yourself to see this movie. Celebrate the freedoms we have in this country, and how their importance makes us winners towards dictatorships who will never understand how important freedom truly is.

Oh, and margarita's? Definitely NOT gay!