The Hobbit: The Battle of the Five Armies Review

The Hobbit: The Battle of the Five Armies Review 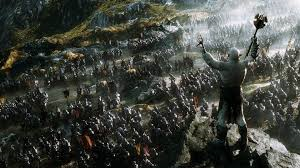 Now this is how you end an overlong trilogy.

I know I have given Peter Jackson a bit of a hard time, expanding a small book into three woozy movies. I know that I surprised myself to be taken aback by what Jackson completed. Despite dragging the story out, despite adding material from Tolkien's appendices, what Peter Jackson created with his "Hobbit" movies has always been worth it. For the third film, the story finally reaches its rousing finale. A moment I have been waiting for awhile now.

I love that the movie wastes no time getting started. Peter Jackson has marked the beginning of each of his Middle Earth movies with a clever opening, just to get the audience reacquainted with the characters and story. This time, he wastes no time getting started. The movie throws itself back into the action, as Smaug (Benedict Cumberbatch) is off to Lake-Town and Bard (Luke Evans) becomes a hero. This is how Peter Jackson chooses to begin his final installment of "The Hobbit." I like that Jackson chose to throw himself into the action right away, wasting no time at all.

Then Thorin (Richard Armitage) and his company of dwarves reclaim their mountain, and the elves, led by Thranduil (Lee Pace) and the Lake Men, led by Bard, wishing to claim something that has belonged to the elves. Thorin refuses, and a new war nearly begins right there. Until, the evil Orcs, lead by Azog (Manu Bennett) arrives to begin the subjugation of Middle Earth under Sauron, who Gandalf (Ian McKellen), Elrond (Hugo Weaving), Saruman (Christopher Lee) and Galadriel (Cate Blanchett) are all trying to stop. This is essentially the movie. Each piece of this trilogy is punctuated by a particular event. The first half is all about Bilbo (Martin Freeman) finding the ring of power, the second half is about the introduction of Smaug, and this last half is the grand finale,  a final showdown. And when I say grand finale, I mean it in every aspect of the word.

Need details? Okay, I'll give you details. Giant worms pushing themselves from the ground, giant bats flying in from the sky. Massive trolls carrying destructive machinery on their backs. This is complete destruction at its finest, but not only are is there lots to see of the battle, the emotional toll is almost too much to bear. Tolkien described the Battle of Five Armies as a terrible battle, and a terrible battle it is. I was shocked by the body count and just how every life lost counted to me.

This second half featured the best acting by Martin Freeman, Richard Armitage and Lee Pace from the entire trilogy. I don't think the casting for a young Bilbo Baggins could have been in more perfect of hands, as is the casting for Thorin. The work by Armitage is just, plain solid and he really brings his character to life. We finally see some of the big motivations regarding Thranduil and Pace does a good job highlighting those motivations. While I thought the inclusion of Legolas Greenleaf seemed like a cheap way to shoehorn a popular character, I think Orlando Bloom does what he can to make his time matter. I like his material he shares with Evangeline Lilly and they both do good work.

Yes, despite the awesome final battle that escalates...and escalates...and escalates into more awesomeness, I couldn't help but still feel like Jackson was just trying to outdo himself, even though that is now how this prequel should have served the overall story. "The Hobbit" is not meant to outshine "Lord of the Rings," its function is to merely set the stage for it. This third entry doesn't make up for all the material that could have easily been edited out. Plus, the references to the "Lord of the Rings" are so on-the-nose that I couldn't help but laugh at them. "Lord of the Rings" still carries the most emotional heft out of the two trilogies, but that is how it was suppose to be all along.

No matter what, this is a great finale. Go find the best screen in your town just watch this slow-burn battle unfold. Go for a group of talented actors really pushing themselves forward in a way I can't describe. If this is the last time Peter Jackson ever visits Middle Earth, than I can happily say that he has done a spectacular job.