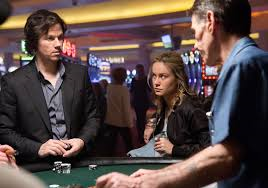 I can't remember if I have ever mentioned this on my blog before, but I have a very "love-hate" relationship with Mark Wahlberg. Yes, believe it or not it is true. There is no doubt that Wahlberg is talented when he wants to be, and I think he has become more mature with his career decisions as he has matured in age. But if you watch every movie in his filmography, its pretty clear when he's working for a paycheck and when he's working because he believes in the movie. It is hard for me to fathom that the same guy who starred in "Max Payne," "The Happening" and "Planet of the Apes" is the same guy who starred in "The Departed," "Three Kings" and "Boogie Nights." And I sincerely hope its clear which block of movies I prefer over the other.

As the opening titles shot off during "The Gambler," I noticed that not only did Marky Mark star in this movie, but he also produced it. So, its pretty clear to me that he believed in this movie. I would also draw evidence to the fact that this is the very best acting work Wahlberg has done so far, bar none. Wahlberg plays Jim Bennett, English professor by day, and gambler by night. Actually, I am not sure if the term gambler can even be put on Jim Bennett. It seems what draws Bennett to the world of gambling is the high he gets on betting large. Just as some people are addicted to drugs, and others are addicted to alcohol, Jim Bennett is addicted to betting at the tables. This gets him into very serious trouble, yet he never seems to mind. Using the term broken when describing Jim Bennett is a sour understatement. This guy is a dead man walking, every single time he steps into a casino, and Wahlberg is very particular that we feel everything Jim Bennett is feeling.

Jim Bennett ends up owing two very dangerous thugs lots of money, and he plans to pay them back by borrowing money from another dangerous thug (played wondrously by John Goodman). We learn that Jim Bennett has seven days to pay everybody off, and the movie ticks the days away as Bennett spends his time either trying to pay off his debts, or not trying to pay off his debts. The ticking clock of the week Bennett is given gives the movie a slick edge, and it repeatedly pays off in a stylish way. I also like the camera work in this movie, as they always give the audience the best seat in the house during the card game scenes. Director Rupert Wyatt seems determined to rub the audience faces into this fast-paced, grungy world of gambling, and he does so with superb skill.

The film is filled with great performances. Michael Kenneth Williams, so good on HBO's "Boardwalk Empire" plays Neville, one of the dangerous people Bennett owes money too. Just like with every role Williams obtains, he adds a creative edge to his character, drawing the audience in with ease. I also really liked Brie Larson, who plays Amy, a student of Bennett's who accidently gets drawn into his life outside of school. Even though Larson isn't given a whole lot to do in this movie, she makes sure every bit of her screen time counts. I also have to give special mention to Anthony Kelley, an actor whose name doesn't have information on Wikipedia yet. Kelley plays Lamar, another of Bennett's students who is the best player on the college's basketball team. Lamar has a crucial role near the end of the movie, and I think Kelley brings unsuspecting life to his character. Much like Larson, Kelley only has a few scenes in the movie, but he also makes every single one of them count. I am sure this guy is off to a resounding career.

I think this is Wahlberg's best performance simply because he's never really played anybody like Jim Bennett. Sure, Wahlberg has been broken and bruised before onscreen, but never to this extent. Plus, he's never played a character who slyly talks through every bad situation. The scenes where Jim Bennett is giving his English lectures is some of the very best material in the whole movie, and how alive Wahlberg is in those moments is incredible. Much like Sgt. Dignam from "The Departed," I think this role will allow Wahlberg fans to look at him in a much different way.

While the movie wraps itself up, making a happy ending that is a tad unbelievable, I still couldn't help but get sucked into this film's story. I couldn't help but keep my eyes transfixed on the screen, dazzled by the characters. "The Gambler" is in no way a deep or meaningful movie, but its confident enough to be wildly entertaining.