Suicide Squad cast has been made official 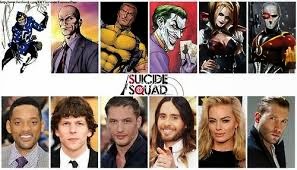 Besides "Batman vs. Superman: Dawn of Justice," it doesn't seem like DC and WB have been pushing any other movie harder than "Suicide Squad." The Suicide Squad had their own animated direct-to-video movie that came out earlier this year, and I have a review on it, if you'd like the link. The team also made a couple appearances on The CW's "Arrow," and they will again in the future. Tonight, the official cast has been set in stone for the live action movie which will be set in the DC Cinematic Universe. I don't know why DC is pushing this team so much, but perhaps their popularity is gaining traction. The team is made up of several supervillains of the DC Universe who are forced to work for the United States government, if they don't, they die. Pretty simple, right?

It was announced officially today that Will Smith will play Deadshot, Tom Hardy will play Rick Flagg, Jared Leto will play The Joker, Margot Robbie will play Harley Quinn, Jai Courtney will play Captain Boomerang and Cara Delevingne will play The Enchantress. Directed by David Ayer, who directed "Sabotage" and "Fury" this year, this is going to be one wild movie.

There are some good things and bad things about this casting, and I am little worried about the movie. If there is anything David Ayer can do well, he can get great ensembles to play gritty, amoral characters, and he can set them loose onscreen, just to see what happens. He's got a keen eye and he's absolutely perfect for the material. I just don't know if this cast is, not all the way.

First of all, I can't believe just how much popularity Jai Courtney has sparked since his one season stint on "Spartacus." He ruled the part on that show, and he's been ruling each part since, no matter if the film has been good or bad. He will no doubt be a great Captain Boomerang, and I love that two "Spartacus" alums will cast unique signatures on this one particular character. I love that Tom Hardy will play Flagg, and Margot Robbie as Harley Quinn is genius, just the right actress for the role.

I think Jared Leto is going to do extraordinarily well as The Joker, almost so good that I feel DC cast somebody a little too safe. I feel bad for him though, because I can already predict the backlash before he's even had a chance to prove himself. I had a long discussion why The Joker should appear in the DC Cinematic Universe over the summer. I also discussed why Ledger fanboys need to shut up. As I stated over the summer, Ledger was great, he totally revolutionized the character. But Ledger does not in any way, shape or form, "own" the Joker character. How about we see what Leto can bring to the table? How about we open our minds to a brand new interpretation? Yes, it annoys that The Joker was never apart of the Suicide Squad, and WB is doing this just for monetary concerns, but come on, let the guy play the character.

Then there is Will Smith, the sole misstep in the casting of this movie. If Ayer decided to cast Smith as Bronze Tiger, perhaps that could have worked. But Deadshot? My God, what a terrible move on WB's part. First of all, we all know that Will Smith is going to work tooth and nail to make this a "Deadshot featuring the Suicide Squad" movie, right? Let's not kid ourselves, if Smith is not front and center for this movie, he's either going to walk or complain and put unwanted pressure on the studio. Second of all, Smith is across-the-board wrong for Deadshot. Deadshot is a very particular character to play, not a character to smack an obnoxious acting style on because you won't have it any other way, so why cast someone who fits that personality? Will Smith has grown arrogant and entitled over his career, and that spills into every character he plays. He can't help himself. He is going to expect to be the lead, he is going to expect to be front and center in this movie. If he doesn't get it, he will bitch about it for God knows how long. I think there is a reason why Emmerich doesn't want Smith back for "Independence Day 2."

Besides Batman vs. Superman, this is the only other DC movie that I am excited for, and they kind of botch a very important piece of casting. I remain optimistic though, this could be the craziest, wildest, strangest of all the DC movies we are going to get. If Ayer and his awesome cast he has assembled are on their A-Games, this movie is going to be a knock-out.