Overlooked Film of the Week- #89
The Cabin In The Woods 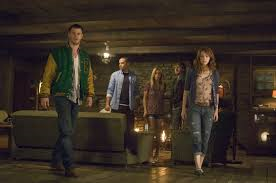 I am really surprised that not enough people talk about this movie.

When I bring it up, it always seems like a select people have heard of it, and that includes the biggest of horror fans. I can't believe most horror buffs I know have never taken the time to catch this one. This is a horror movie wet dream. It could also be described as a summation of the  entire genre as a whole. This somehow seems like the perfect time to bring up "The Cabin In The Woods."

You know the guys over at Walt Disney Studios and Marvel Studios? The guys who are tearing it up for Marvel right now? Well, just in case you don't know, the big names that headline the Marvel universe right now are Joss Whedon and Drew Goddard. They both came together to make this ode to the horror genre. Goddard directed it, Whedon produced it and they both took part in writing the screenplay. It is of no surprise that Chris "Thor" Hemsworth plays one of the main characters in the movie. Just as Whedon and Goddard have such a firm grasp of what makes the Marvel Universe so great, they use that same steady hand to play with horror genre fetish after horror genre fetish, while also making a movie that stands on its own terms. Never something that is easy to do, and both Whedon and Goddard make it look effortless.

As the friends are being attacked by zombies, two technicians (Richard Jenkins and Bradley Whitford) are having a conversation and working on...something. It becomes pretty clear that they are somehow connected to what is happening to the five friends, but how? Why are these five friends being specifically stalked by zombies? Why are they constantly making dumb decisions? The key to these questions lie in what Jenkins and Whitford are doing, and both of these veteran actors make the most of their screen time. In fact, the entire cast, across the board, is really good. Hemsworth, Hutchison, Connolly, Williams and Kranz are all spectacular in their roles. They are cliché when they need to be, but when all the big secrets of the movie begin to pour out, I like they suddenly become humans stuck in an extraordinary situation. The screenplay is so smart, so rich with detail, that it will make every horror fan smirk in delight. There is also a big cameo by a major actor at the very end of the movie, and trust me, it is a dozy.

Also for a movie that is purposely bending the horror genre, I was shocked by just how scary some moments of the film were. I love that Whedon and Goddard play with sudden deaths in one crucial moment in the film. I love that there are moments for the more obscure fans of horror and also moments for the gore lovers. There are also moments dusted across this entire runtime that will make the most stern of horror buffs happy, and I could not get over the foreign homages that Whedon and Goddard made in this movie, and if you keep your eyes peeled, you'll slap your knee at all the Easter Eggs hidden in this little treasure.

If you have seen this movie before, do me and everyone who hasn't a favor and don't submerge the comment section with spoilers. Let whomever hasn't seen this yet experience it with a clean slate, they'll be glad they did. I know its been a few years since its release, but since so few people ever bring this movie up, its about time this one has its due.