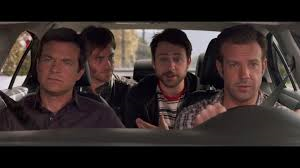 I never reviewed "Horrible Bosses" on this blog, simply because it had not existed yet. While I haven't seen the first "Horrible Bosses" since my first screening back in 2011, I do remember enjoying the movie quite a bit. I never understood why critics took such a huge stand against the movie. While the movie possesses a zany premise, there was enough humor to make it all count. "Horrible Bosses" may not be a movie I'd rush out to buy and own, but it was a good time at the theater.

Last night, I saw "Horrible Bosses 2" and much like the first film, it has a very zany premise. Perhaps a bit zanier than the first film. Also, much like the first film, there is enough humor to make it all count. The return of Jason Bateman, Jason Sudeikis and Charlie Day make this all worthwhile. They had amazing chemistry in the first film, and that has clearly carried over into the sequel. The addition of both Chris Pine and Christoph Waltz also makes the film better than it needs to be, and Pine in particular stands out in an unbelievably hilarious performance that is also outrageous. (More on Pine in a little bit.)

Nick (Bateman), Kurt (Sudeikis) and Dale (Day) have all learned much since the first film. Now, they feel they don't want to work for anyone ever again and plan to become entrepreneurs. In the films overly-funny opening, the trio showcases their product, hoping to receive some potential buyers. But sadly, the showcase goes south and the boys are down on their luck again. Until they get an unexpected phone-call from Rex Hanson (Pine) wanting to invest in their product. Finally, the trio feels as if they can finally succeed, until the trio realizes they have been duped by a shady business deal. The trio needs money fast, as they put their entire lives into this product, so Kurt and Dale insist that do the dirty deed of kidnapping (or is it kidnaping?). The plan is to kidnap Rex and force Rex's father Burt (Waltz) to pay up. With the assistance of Motherfucker Jones (Jamie Foxx) and David Harken (Kevin Spacey), the trio plans their revenge.

So yes, the film is very funny. Not only are Bateman, Sudeikis and Day very funny once again, so are both Foxx and Spacey, both turning out very good performance again, both very funny. Jennifer Aniston reprises her role Dr. Julia Harris, Dale's old-boss, and she does nice work once again. Let me touch back on Pine one more time. We have seen Pine in several types of movies by now, ranging from independent to blockbuster, action to romance. We have never really seen him take on a full-fledged, raunchy comedy. I have to tell you that he funny in a way I would have never expected from him. Also, his character is insane in way you'd never expect Pine to be, and he nails every single scene. After an entire movie of maniacal laughing and vicious plots, I think Chris Pine would have made a terrific Joker.

"Horrible Bosses 2" suffers from the usual sequel bug. This film pretty much plays out like the first film. "Horrible Bosses 2" is a movie that pretty much treads water, from start to finish. The premise might be slightly different, but the execution is the exact same. We have come to expect this with most sequels, but much like the first film, the happy ending this film reaches seems a little forced. But hey, for a sequel to tread water and still get so much right seems pretty cool to me.

I hope this review doesn't seem bias, as I really enjoyed the first film. I thought everybody did a wonderful job in the first film, and they did an equally wonderful job in this sequel. I like the rigorous acting style that Bateman, Day and Sudeikis possess and I love it when Jamie Foxx is in full comedic mode. Once again, "Horrible Bosses 2" won't be a film I rush out to buy, but it was a great time at the theater. That's really all I needed on a Saturday night.