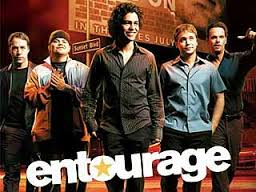 One show that got me to seriously start considering television was "Entourage." Before that show, and a rare amount of other shows I committed myself to, TV really wasn't my forte. I didn't like a lot of television and I put a lot of my screened interests into movies. I see my love spurred by TV once again, but as far as the 2000's go, "Entourage" pushed that interest forward.

I think part of the reason why the show had such a resonating effect on me was because it was a show about the movie industry, which I was fascinated by. It also revolved around a group of close-knit friends, which made the show a favorite among my college friends. It was actually my college friends that introduced me to the show. It was hard not to see the reflections of the friendships on the show and how they paralleled our friendships.

I felt the show ended on a proper note, and I did not see how the show could have more story to tell. So it kind of baffles me that a movie about the show is coming out next year. What possibly could be so good that it needed to be in a movie? How much further can they push these characters? What possibly needed to be said that was not said in the television show? I don't know, but I hope it was more than just to make a quick buck. It seems like so many decisions are made on the quick buck that going to the movies is becoming a chore, I hope this particular time proves me wrong.

Check out the trailer below: