The Essentials-#82
Hannah and her Sisters 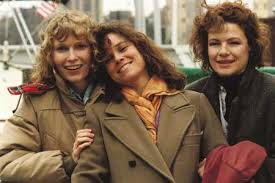 I know I have talked a lot about Woody Allen over the years on this column. I am sorry for that, I do really try my best to keep things mixed up here. But, its getting close to Thanksgiving, and we are once again entering one of my favorite times of the year. So, its easy for me to think of movies that take place around the holidays. "Hannah and her Sisters" in particular takes place within three Thanksgiving celebrations. Each of these three special days revolves around Hannah (Mia Farrow) and her sisters and how their lives overlap with hers in the most broad of ways.

This is one of the most intricate Woody Allen movies ever made. I can't remember another time he made something this broad, something filled with so much depth and density. There are so many stories that interlock within this film that it is almost harrowing. The best part? Woody Allen makes complicated storytelling look easy. Usually, Woody Allen's films are very general in the way they tell a story in such linear fashion. Here, Woody Allen really dug deep to tell a story that challenges you on multiple levels and the result is quite astounding.

We meet Hannah during one Thanksgiving celebration. We then meet her husband Elliot (Michael Caine) who is secretly in love with Hannah's sister Lee (Barbra Hershey). Lee is married to Frederick (Max von Sydow) a stern recluse and it is driving Lee nuts. We also meet Hannah's other sister Holly (Dianne Wiest), a woman who always seems to be trying a brand new profession and always seems to be failing in the love department, so much to the point that it puts strain on her, Hannah and Lee. There is also a wonderful sub-plot revolving around Hannah's ex-husband Mickey (played by Woody Allen himself), who after a terrible appointment with his doctor, begins to question the meaning of life itself. Its a great role for Allen, one of his very best. In fact, all the actors in this movie do incredible work.

Some may take a look at "Hannah and her Sisters" and write it off as a typical Woody Allen film. Yes, "Hannah and her Sisters" deals with lying, cheating and divorce. There is a great emphasis on Elliot having a crush on Lee, and that plays a big part in the narrative of the story. Woody Allen's Mickey is Allen in the flesh. A lot of the movie also deals with existential philosophy and takes a deep stand in the themes of death and morality. The neat thing about "Hannah and her Sisters" is how Allen forces you to think you have him figured out, just to completely blindside you with glee. Allen makes you think one storyline is going to go one direction, then goes a completely different direction. I give him mad credit for it, I really do.

Oh and also like typical Allen films, its funny. There are several moments in this movie with make you laugh out loud. There are several situations which could only have come from Woody Allen's brain, and they work every time. While several Woody Allen alums show up in this film, there are also several newbies that make this movie special. This movie easily features one of the best overall casts Woody Allen ever assembled for one of his films, and they all nail their parts. I still find it quite unbelievable how easily Allen can balance drama and humor.

"Hannah and her Sisters" may seem like typical Allen at first glimpse, dig deep and it will surprise you.