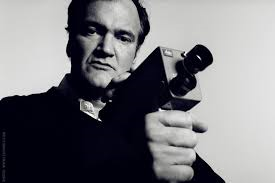 I understand that retiring is a natural progression in life, but the thought of any one of my favorite directors retiring from the business definitely sounds sad. That really comes from being a fan of their work, but I can't help it. A world without a particular director sounds like a world I would not want to live in. No matter if that director is young or old, Clint Eastwood and Woody Allen are both getting up there, and they have made several movies, towering pieces of art that will leave them each a legacy. But the thought of Eastwood or Allen deciding to retire, that would kill me for a day or so.

Now the thought of Quentin Tarantino directing? That would be sad on an entirely different level.

Yes, Quentin Tarantino is a guy who loves the play the "Am I or aren't I retiring?" game around Hollywood. But he once again announced a brand new retirement plan. A more specific plan than we are used to, which could possibly mean that he's for real this time. "The Hateful Eight" will be Tarantino's eighth film (haha), and Tarantino made it clear that that he has two more movies in him afterward, and then he's done.


“I don’t believe you should stay on stage until people are begging you to get off. I like the idea of leaving them wanting a bit more. I do think directing is a young man’s game and I like the idea of an umbilical cord connection from my first to my last movie. I’m not trying to ridicule anyone who thinks differently, but I want to go out while I’m still hard…I like that I will leave a ten-film filmography, and so I’ve got two more to go after this. It’s not etched in stone, but that is the plan. If I get to the tenth, do a good job and don’t screw it up, well that sounds like a good way to end the old career. If, later on, I come across a good movie, I won’t not do it just because I said I wouldn’t. But ten and done, leaving them wanting more, that sounds right.”
Read more at http://www.joblo.com/movie-news/quentin-tarantino-says-he-will-retire-after-his-tenth-film-289#yp1RTapWvPPLC45t.99

Valid points all around. But at 51 years of age, I don't really find QT old. Sure, he is an artist who usually takes his time to make his movies, which could be part of the reason why there is so much shine on his career. But I don't find 51 that old. I also think its interesting to be done after ten films simply because I feel he is reaching the height of his artistic talent, and I think he are just beginning to sort out what he can do with his art. I love watching Tarantino put a unique spin on a random genre, from the car movie, to the kung fu movie, to the WWII movie all the way to the western. There is not another director out there who loves playing with genres, for that reason, I am not ready for him to go away.

SOURCES:
Article from www.joblo.com
Quote made by Quentin Tarantino from AFM
http://www.joblo.com/movie-news/quentin-tarantino-says-he-will-retire-after-his-tenth-film-289
Posted by Shawn Hoelscher at 8:23 PM