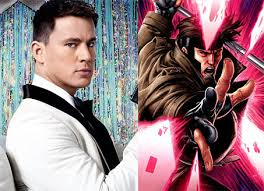 As I have grown as a film fan, it is interesting to me who I like as actors now and who I don't. I remember growing up, one of my very favorite actors was Will Smith. I found him funny, I found him charming and I pretty much found him to be the coolest dude on the planet. Anybody who knows me well, knows that my thoughts on Will Smith have changed drastically. He has turned into one of the most self-obsessed forces in Hollywood and it is quite the annoyance. On the flip side, I couldn't stand Channing Tatum in his early career, and ever since "21 Jump Street" I have completely changed my opinion of the guy. As much as Matthew McConaughey is turning his career around, so is Tatum.

That is great, because I always felt he would be perfect for this new superhero climate. Now that he has become a full-fledged movie star, why not appear in a superhero movie. I would have never guessed that he would play Gambit. Gambit is a member of the X-Men. He is a Cajun who can charge any object he touches with an energy, basically turning anything into a grenade. His weapon of choice, are playing cards.

Imagining Channing Tatum with a Cajun accent makes me laugh out-loud. But I wonder if that is a character trait Fox will study in "X-Men: Age of Apocalypse" in 2016. What is even a bigger shock is that it seems that Tatum will have his own solo Gambit movie sometime after Age of Apocalypse. I worry about this, simply because I could never picture Gambit in a solo movie. Gambit isn't like Wolverine, he isn't a loner, he doesn't have a particularly dark past. To my knowledge, Gambit never really went on adventures by himself. So why bring the character front and center into his own movie? Just because Channing Tatum is attached to play him? Can a movie star really bring new depth and character to a superhero who never went solo in the comics? Look, I have no doubt in my mind that Channing Tatum will be a great Gambit, but I don't think Fox should just hand-out solo films to every X-Men idea that goes popular. We should really see how the character translates for audiences in Age of Apocalypse before we think about a solo movie afterwards.

Posted by Shawn Hoelscher at 9:18 PM